If you’re not a Melburnian, or at least familiar with the place, receiving instructions to “meet up at Docklands – Cow Up A Tree” could lead to some understandable confusion. But it’s pretty straight forward. We were to meet where there’s a cow up a tree.

It was looking a bit touch and go in the lead-up to this ride. Not for the cow – it’s been stuck up there for years. Rather it was the weather forecast that was looking decidedly iffy, and it didn’t improve as the scheduled time drew closer. Given the bay-side location of our destination – Williamstown – concerns about storm surges were quite valid if the weather were to turn ugly.

Thankfully the weather dawned clear and not too cold, though it was a bit breezy in places. Nothing to stop the ride going ahead, so it was off to the rendezvous point.

A fine, if cool, morning – perfect for a ride.

The glow of a yellow high-vis top waiting up ahead made me think we weren’t the first ones there – and indeed, we were not, but as I pulled up I realised that although the cyclists were waiting for us, they weren’t on Bromptons themselves. What’s more, there turned out to be a whole group of riders waiting for the Melbourne Brompton Club to turn up!

Cyclists gathering at Cow Up A Tree

As it turned, out riders with the Go Cycling Melbourne group had come to ride to Williamstown with us. Escorts or windbreaks? Take your pick! (as someone quipped). Either way, our group of five had just grown to 13! Six Bromptons, a mountain bike, an e-touring bike, and road bikes made up our motley crew for today’s ride. Fluro tops were trending, but on the whole our clothing was as assorted as our bikes. Once introductions had been made we were finally underway! 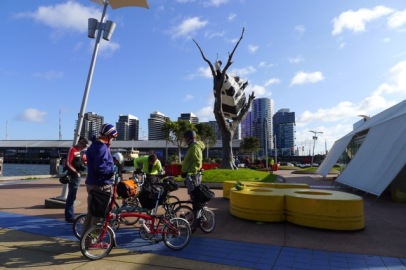 Getting ready for the ride at Cow Up A Tree

Once we left Docklands and crossed over Railway Canal, Stephen and I were breaking new ground on this ride. It was probably a familiar route for the others. We’ve certainly seen plenty of riders take this path before, and no wonder it’s popular. The design is very good; no tangling with traffic, no being left to wait for traffic lights without a button to press to ask them to change for you. 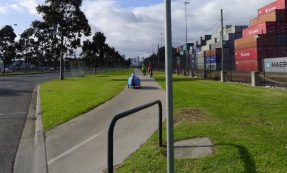 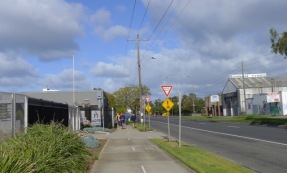 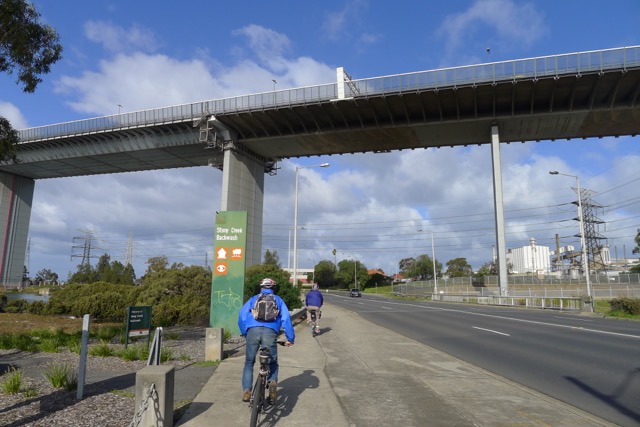 Passing under the West Gate freeway

The wind was coming directly at us for most of it, but that couldn’t be helped. At least it wasn’t raining! Given the forecast, the weather was certainly cooperating very nicely! There are long stretches of flat straight road, and a few small rises, but on the whole it’s a pretty comfortably ride especially once you reach Stony Creek Reserve  – from there you follow the waterfront right around to the main street of Williamstown.

Approaching the mouth of the Yarra River

Passing the easily recognisable stack at the refinery

There were a few people fishing along here too 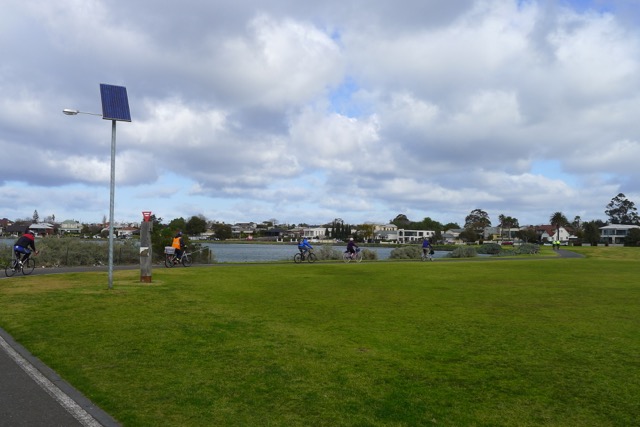 Williamstown didn’t seem quite as packed today as it has on previous occasions we’ve visited. (Maybe that’s because we weren’t looking for a carpark this time…) After another re-group we headed down to Gem Pier and the shelter of the HMAS Castlemaine. I have to say it made a pretty good wind-break – pity it isn’t particularly portable. I was already feeling the start of windburn on my face. 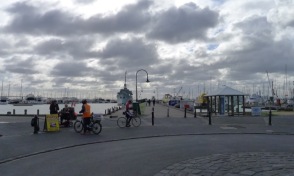 We’ve all made it! Time for a photo then off for a hot cup of something 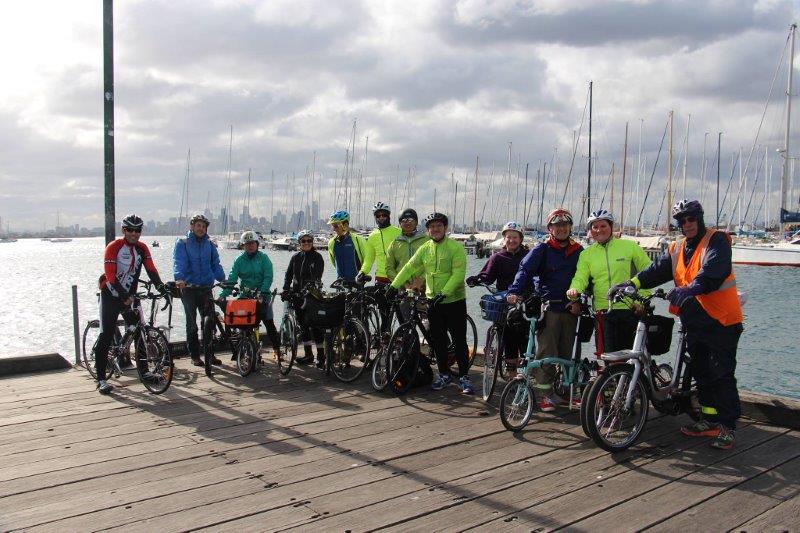 By now it was definitely time to choose a cafe that could accommodate our group and enjoy a nice warn beverage. I’m not much of a coffee drinker; a hot chocolate is my preferred brew in the cooler months! Despite the heart-sinkingly long queue inside we didn’t end up waiting too long for our orders – just long enough to chat to a passer-by who stopped to ask about our bikes. They are pretty striking, especially in a group.

With everyone fed and watered, we stood up to leave just in time to surrendered our places to a motorcycle group who had just parked their rides across the street. Another audience to impress with the convenience of the Brompton design, though I’m not sure we have any converts from their mob.

Departing Williamstown the wind was once again in our faces and riding along the foreshore was a slog. Conditions improved as we neared Newport Park and continued into Riverside Park where there are a few more trees beside the track.

Opposite the old Pumping Station behind Science Works is the Spotswood Jetty where the Westgate Punt collects passengers who wish to cross the Yarra River to Port Melbourne. Stanley, Elsie, Stephen and I bid farewell to the other riders here as we’d decided to take the shorter (and easier) route back to Docklands. Cory farewelled us from the jetty, but didn’t cross the river as it would have been the longer way home for him. 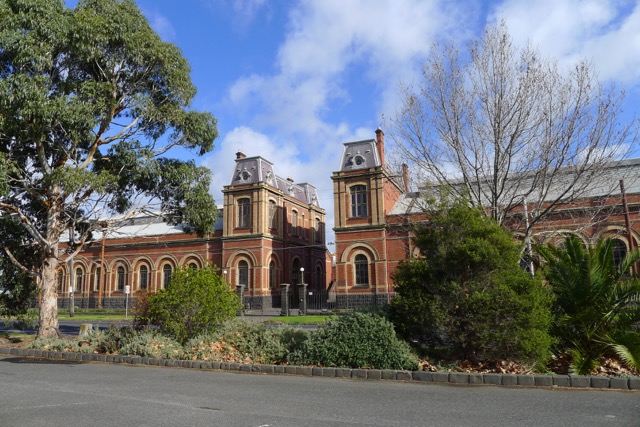 There’s plenty on room onboard for bikes and pedestrians

And then there was one – via Cory (@baudman)

In a somewhat surprising move, the punt operator offered me the wheel. I thought it was for maybe a minute or two – time enough to get a photo – but he didn’t move me on so I got to steer the punt the whole way across (it’s not that far). Docking was a different story – quite understandably so, though I was happy to give it a shot!

Returning to Docklands once on the other side is as easy as turning left and following Lorimer Street all the way back to Webb Bridge, though we did take the water side path in front of South Wharf Drive. The gardens along here are really quite lovely. (Thanks to a shower of rain that came through then I don’t have any photos of this section though.) As we came off Webb Bridge and turned onto Harbour Esplanade, who should we see approaching but the Go Cycling Melbourne group who we left at Spotswood Jetty! We weren’t quite back at Cow Up A Tree, but this was where the riders truly spilt up, after a really enjoyable day’s ride – to try to beat the rain home!

Back on firm groud, it’s straight up Lorimer St to get back to the city 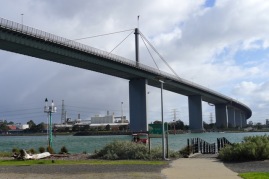 There wasn’t much traffic around, and the tree-lined street made a pleasant ride

For more photos from this ride please take a look at Stanley’s photos or  Cory’s photos (note: both are FaceBook links). You can also check out the Melbourne Brompton Club on Flickr, again courtesy of Cory.