When you think of Melbourne icons, our trams must surely rank in the top 5. 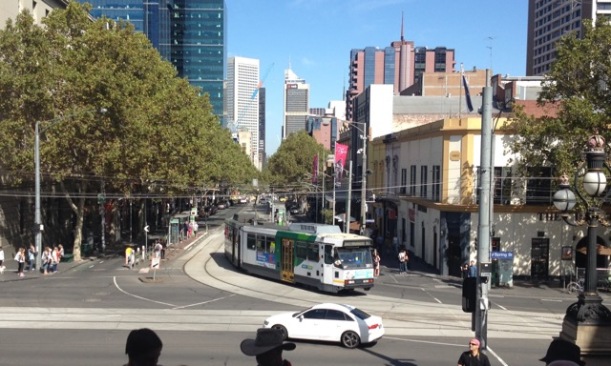 The Melbourne Tram Museum at Hawthorn is just off the Main Yarra Trail (a shared path along the Yarra River); a worthy destination for this month’s group ride.

Meeting up at Federation Square we took a few snaps (because you can’t let the chance go by), before walking past the temporary ice skating rink (as instructed) then we were underway!

Meeting up at Federation Square

Brompton folding bikes at Federations Square, with St Paul’s Cathedral in the background

Walking past the temporary iceskating rink (as instructed)

Underway at last, along Princes Walk

It’s a pretty cruisey ride along the river. We followed the Yarra Trail along the north bank of the river the whole way to where Wallan Road crosses the Yarra River. Some of it is a floating walkway, but mostly it’s firm river bank. 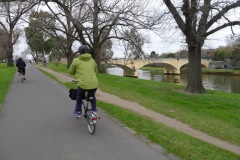 Approaching Morell Bridge, a pedestrian and cyclists bridge which connects the Royal Botanical Gardens with the Olympic Park precinct

Some of the path ducks under CityLink (M1)

Greg and Stanley zipping along the path

The Tram Museum is in a beautiful red and cream brick building on the corner of Wallan Road and Power Street, Hawthorn. Next year will be the celebration of its 100th birthday! The museum doesn’t occupy the whole of the premises any longer, and isn’t as large as the Hawthorn Depot was in its heyday. Despite now including residential units in the main building, and having a new apartment building at the back where the second shed used to be, the facade has remained as it’s protected by its listing on the Victoria Heritage Register (read more here).

The exterior of the Hawthorn Tram Depot, now containing residential apartments and the Melbourne Tram Museum

Arriving at the Tram Museum – the entrance is off Wallan Road

Totally unfazed by the arrival of a group of ‘folders’, we set our bikes and bags down while one of the volunteers gave us a bit of history about the history of the depot and a couple of the trams they have. Then we were welcome to explore and take as many photos as we wanted.

At the front of the tram lines (photo by Stanley Tan)

Out in the public the stained glass windows wouldn’t have lasted long. In the museum they can be appreciated properly 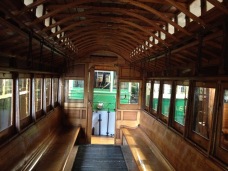 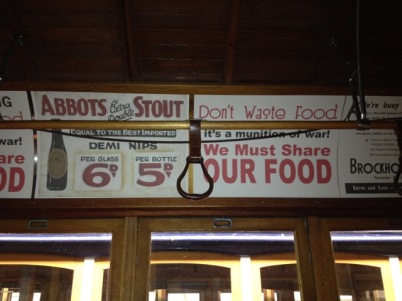 The seat back can flip around so you’re always facing forwards – love it! 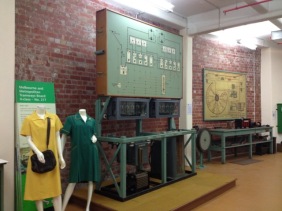 A recent addition to their collection is the Z1 81 ‘Karachi W11’ (the link provides information on the history of the Z Class trams as well as how tram 81 came to be ‘Karachi W11’ as well. Definitely worth a read!)

In line before the eye-cathing W11 ‘Karatchi’ Tram

The inside of the W11 ‘Karatchi’ Tram was quite amazing 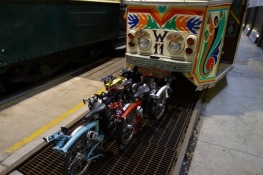 Folded in formation, our Brompton before the W11 ‘Karatchi’ Tram

This gorgeously extravagant tram is the work of 5 Pakastani artists and was run on Melbourne’s City Circle loop during the 2006 Commonwealth Games. A recent addition to the museum, I hope it becomes a permanent resident!

Although no questions were asked as we carried our bikes in, it’s not to say that they didn’t draw any comment at all…

“What make of bike is that?” was the first question (it’s usually a good starting point). Before long, the museum volunteer who asked had all – and more – of his questions answered by our enthusiastic group!

Discussing Brompton design with one of the tram museum volunteers

At present, the museum also has a Tramway ANZACs exhibition to honour the tramway employees who went off to fight in the Great War and the role of the tramways during that time. If you can’t visit the museum you can read more about the displays and personal stories here.

Part of the Tramway ANZACs exhibition at the Melbourne Tram Museum

Unlike other Australian state capitals who ripped up their tram tracks years ago, Melbourne has grown its tram network over time, although we no longer run cable trams anymore. You can compare a map of the lines that were in service in 1916 here compared to today’s network managed by Yarra Trams here. The irony is that “light rail” is now being (very slowly) reintroduced to the Gold Coast and expanded in Sydney. I don’t know of any plans to expand Adelaide’s single line, but at least they kept that as a functional means of transport for commuters – if you happen to live close-by.

The afternoon was getting on; we’d explored the trams, seen the ANZAC exhibition and answered Brompton questions in return, so it was time to say goodbye and head back to the city the same way we’d come. Just before leaving Stephen kindly bought each of us a badge from the gift shop to remember the trip.

Elsie waiting for the rest of us to catch up!

It’s Siew Mee in the lead, followed closely by Stanley, Stephen’s coming in third, and Greg’s hiding behind the tree 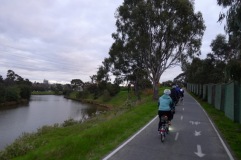 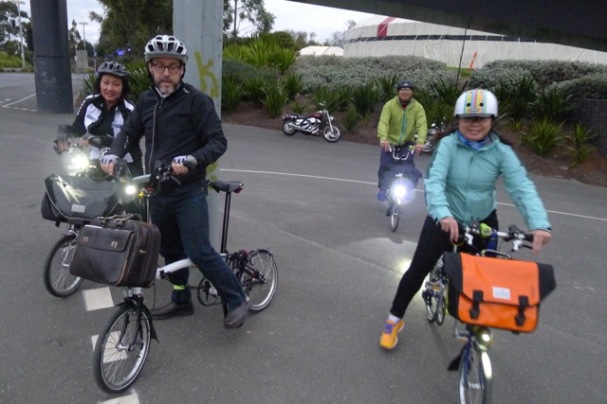 End of another successful ride; time to part ways

It was another enjoyable ride with the group.

Thanks to Stanley for letting me use a couple of his photos in this post.