The generator fired up and the lights came on at Glade House; our first full day of walking the Milford Track had arrived!

For all that this may be ‘glamping’ (the queen-sized bed & ensuite option, hot showers, prepared meals, small pack size) our guides weren’t shy about mustering everyone out of their rooms to be back on the track for an 8:30-9:00am start. Slave drivers! Had they no pity for us poor guests who’d walked a whole 1 mile (officially) of the track yesterday? (I think the 3hr bus ride was more exhausting than the short walk at the end.)

Officially we had 10 miles (16km) to walk today (at the end our GPS recorded 14.5km (~9 miles), mostly following the river up the valley. We could knock that off in a few hours – surely they could have let us have half an hour more to get our stuff together?

But we didn’t grumble out loud (that I can remember). And if we did we weren’t the only ones. And we certainly were not (quite) the last ones to leave Glade House. Even so, there were a lot of eager people ready to go at 8.30am! We saw them – an impatient group – as we were heading back from breakfast to finish packing.

It wasn’t long before we were under way, an there was certainly a lot of scenery to appreciate.

The Clinton River was mirror-like on this beautiful morning as we waved good-bye to Glade House. A perfect day for a hike!

The Clinton River near Glade House

Silver beech trees provide a dappled light on the path

We passed Sentinel Peak then followed the river up the Clinton Valley which is to the west of the peak. The mountains and the clear blue/green water were what drew our attention the most. 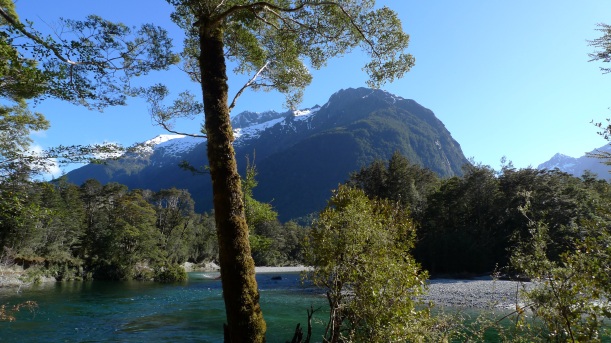 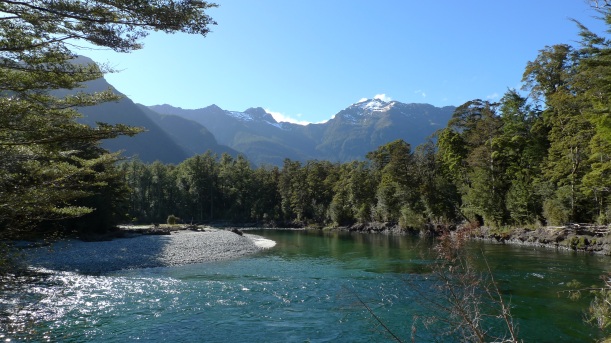 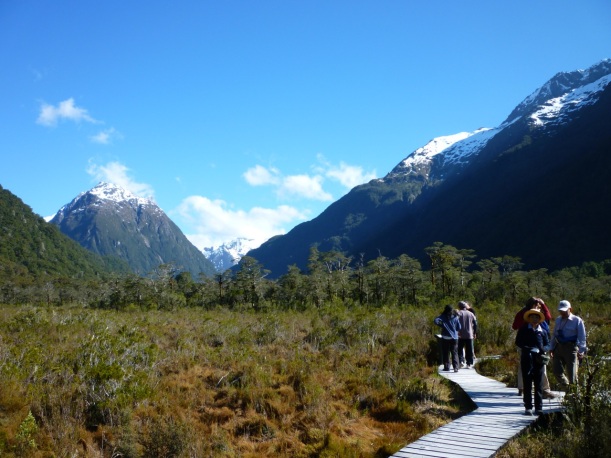 Since it was such a large group, we didn’t spread out much for a while. When Claude, the head guide who was up the front, stopped to point something out only the people right up the front near her could hear. The other guides who were spaced out among the guests could have a guess what she was saying if it was a ‘usual’ stop, but sometimes had as little idea about what she was saying as we did. It was a bit frustrating because it wasn’t supposed to be a stop-start group walk, but that was the result of having been hurried out the door so we wouldn’t be left behind. It wasn’t until after the first stop for morning tea that we all spread out a bit more. 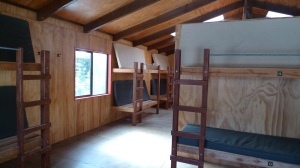 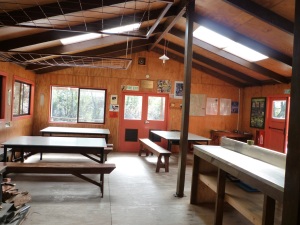 Morning tea at Clinton Hut – the first of four DOC huts on the Track for independent hikers. Pretty good compared with some public huts we’ve seen, but much more spartan than Glade House!

I could stare at this all day – and wish I was there to jump in! 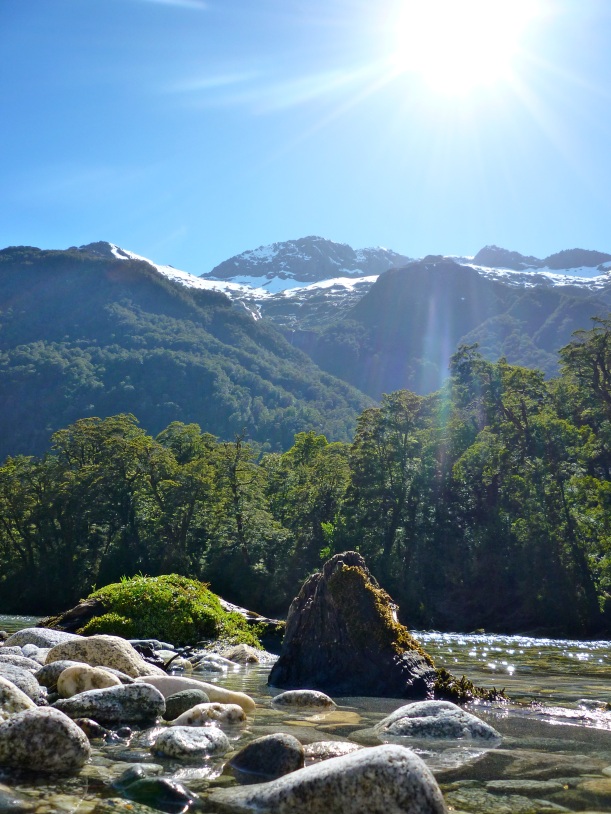 The increased number of sandflies by the river keep your artistic shots to a minimum.

Some of the mosses and ferns that grow at ground level.

There was a perfect spot to go for a swim at lunch, but as there were a couple of clouds around then it wasn’t warm enough to tempt me that much! Well, it was more the hassle of getting dry again afterwards and the prospect of walking in damp clothes. Someone was brave enough to try it, but I gather he wasn’t in for very long! 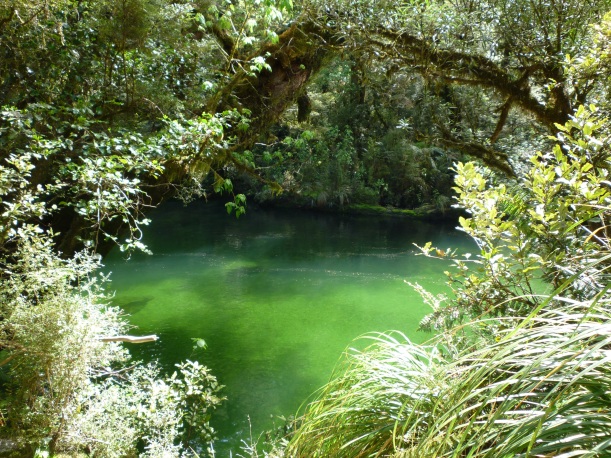 I was temped again by a clear green pool… no salt or chlorine here! Or leaches!

We didn’t want to stop too long for lunch to avoid stiffening up, but it seemed most people were happy to sit around, and (in contrast to that morning) the guides didn’t seem to think it necessary to get people moving again. We were visited by a Kea who didn’t mind being the centre of attention, and we got some good close-up photos whilst keeping an eye out for our packs incase more Kea’s were sneaking up to attack them while our attention was diverted! 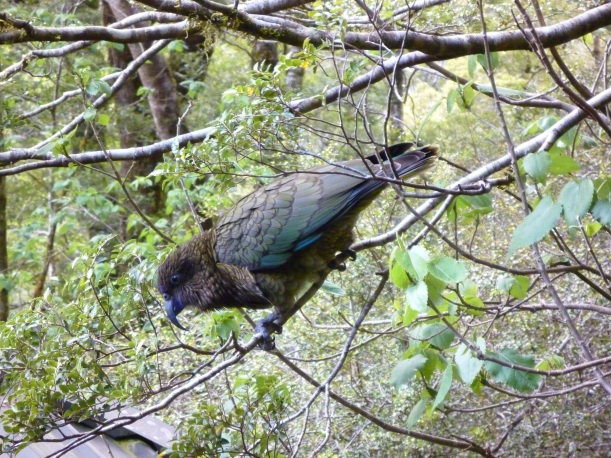 Kea’s are an inquisitive, alpine native parrot – check out the length of the top bill. 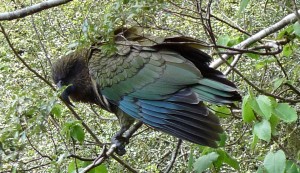 They are beautifully coloured birds, with an orangey-red rump and blue on the wings seen best when in flight

Interestingly, you can’t get insurance for Kea damage to your car. One guy there said that he was stopped at the Hommer Tunnel once, and in the time it took him to visit the loo, they’d pulled off the rubber around his windscreen and it had fallen out! Cheeky Kea’s!!

The track doesn’t keep to the bank of the Clinton River the whole way up the valley. The beech forests are cool and green. Through here the track is pretty easy walking, but remember – it wasn’t always that way. Qunintin Mackinnon would have found the way very difficult – just look at the forest on the side of the path. 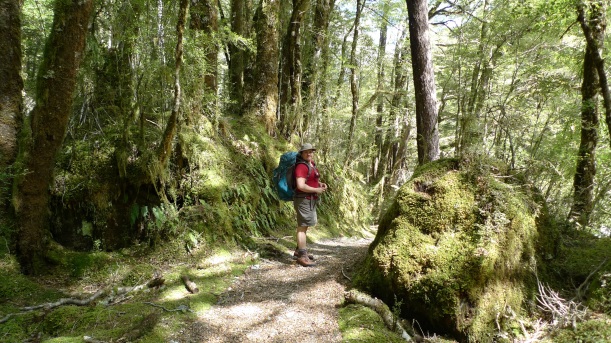 A mossy section of forest

The track is very well maintained. Until 1954 it was the only way to get to Milford Sound; these days 14,000 people walk the track each season! (Milford Track History) There are still a few relics left from the days when this was the ‘main road’, such as this telegraph wire insulator in the tree trunk:

An iconic native New Zealand tree that is often passed along the Clinton Valley is the Lancewood. The adult tree looks like any ‘regular’ tree, but saplings look like a stick with long tough brown spiky-edged leaves dropping from it, with no top. Until the sapling reaches to 2.5m or so, it doesn’t begin to grow adult foliage. The theory is that this is an evolutionary trait to avoid being grazed on by Moa, extinct flightless birds of the same family as kiwis, emus and ostriches. We knew of these trees (but not their story) before this walk because Icebreaker uses the immature tree as a design print for one of their t-shirts Icebreaker Tech T – Lancewood. 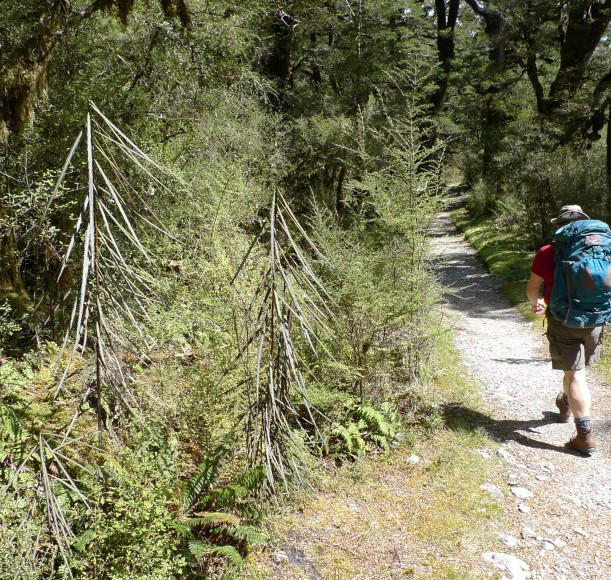 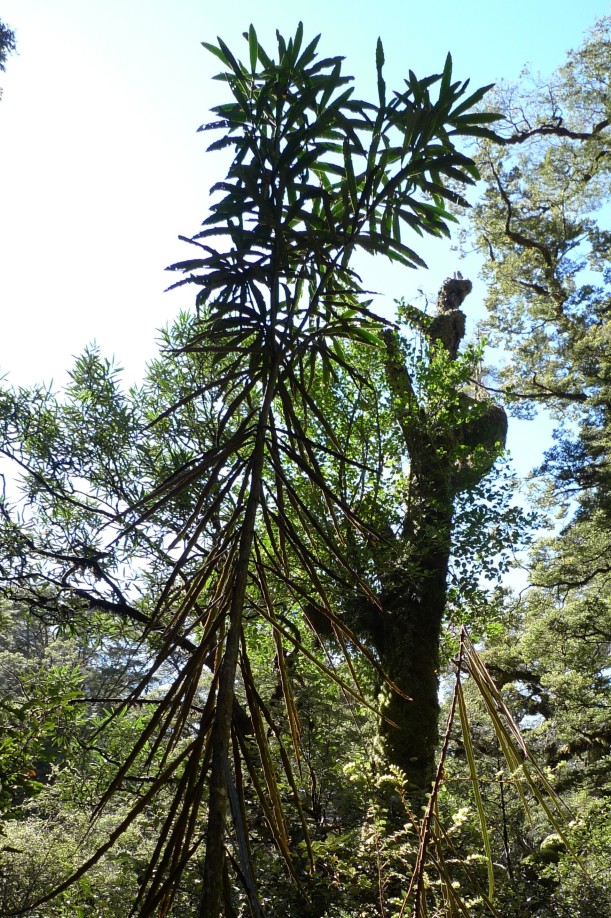 A Lancewood transforming into a mature tree

The track also passes through avalanche danger zones. These areas are generally characterised by a lack of mature trees. The Department of Conservation (DOC) put up signs along the track saying not to stop until you get past the next sign saying it’s okay to do so. When big avalanches come down, the preceding winds can get up to 200-300km/hr, which is what flattens so much of the vegetation.

Warning sign saying not to stop in high risk avalanche area – there will be another sign further on to indicate when you can stop again.

Scars on the hillside from previous landslides 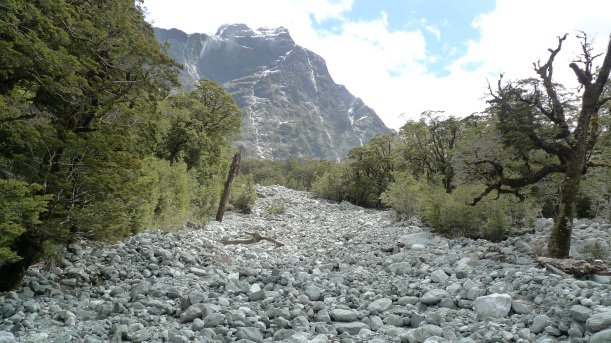 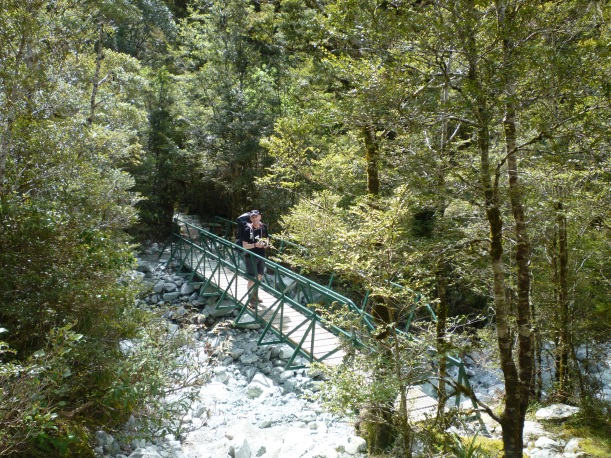 No stopping along here (these were very quickly taken photos)

The further up the valley we walked, the narrower the valley became. As you cross the more open and exposed sections, you can’t help but wonder what it would be like to be in this part of the valley during an avalanche – it’s so steep and close it would surely act as a funnel. A person would be smashed to pieces.

And that is one very good reason why there is an open and closed season, and why DOC do so much to try to trigger avalanches before the walkers are allowed in! All hail DOC!!

The other thing DOC (in conjunction with Ultimate Hikes?) does is fly in temporary bridges. We wouldn’t want to get wet feet, after all…. 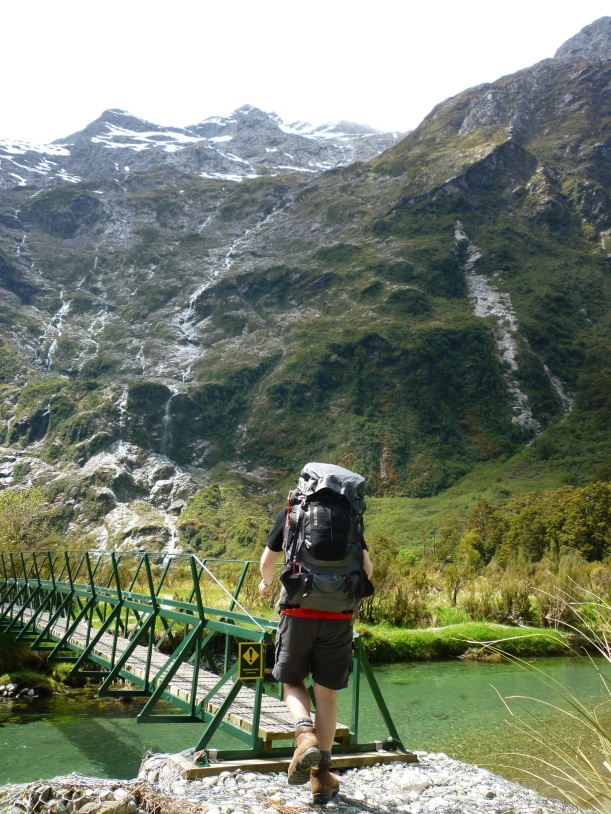 Examples of bridges that DOC fly in for the walking season. These are removed over winter.

No, it’s not so we can keep our feet dry. The reasons for the bridges are so that we’re not damaging the banks of the river and because (as I have mentioned previously) they get 7-9 metres of rain per year! That is a hell of a lot of water by anyone’s standard’s, but when you think about it all running down the sides of those mountains, one pretty good shower is going to raise the level of the creek pretty damn fast. The bridges are so people CAN cross the lovely little streams that you see in our photos.

When I took the photo below there wasn’t much water in sight and, to tell the truth, it was a little stinky to the right, a bit like a swamp. But we had seen a video of people wading through brown water up to their thighs along this section. It didn’t look like they could see the path – just the very tops of the guide posts. Thank goodness the path is built so well it doesn’t wash away! 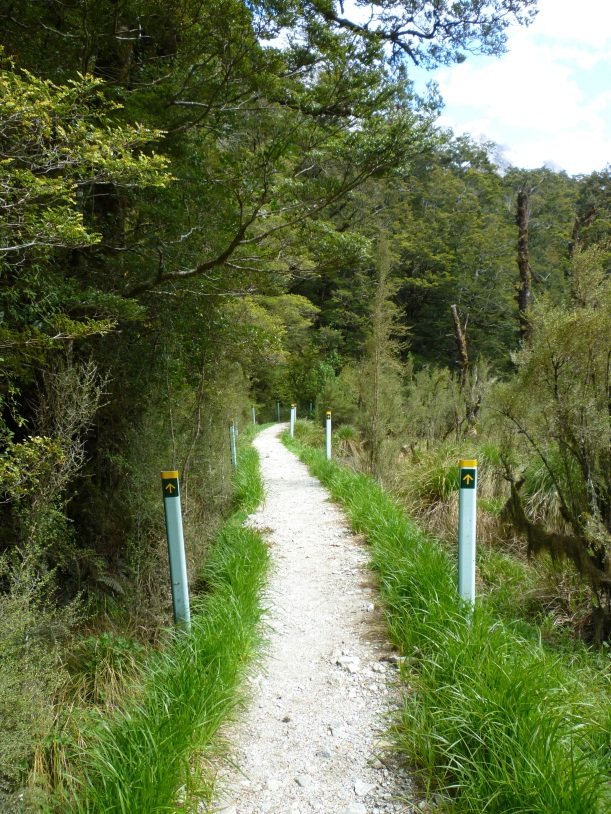 Guide posts along a raised path

Looking back down the valley on a nice, sunny day.

Even when it hasn’t rained for a few days (that is like a drought to this region – the ecosystem here is adapted to coping with a lot of water, not the lack of it), there are still a multitude of ribbon waterfalls cascading down from the icy tops of the mountains, feeding the streams that become the Clinton River.

The melting ice from the tops of every mountain continually feed the river. It’s so pure you can drink it unfiltered.

It was mid-afternoon by the time we reached the turn-off to our second night’s accommodation. We were glad to get there, and pleasantly surprised to be greeted with orange quarters which were very refreshing.

We arrive at Pompolona Lodge

The name ‘Pompolona’ came from a type of scone that Mackinnon made for his guests. He didn’t have butter, so he used the fat from wallabies (a feral pest in New Zealand). He called the scones pompolona’s.

Our room had a really good view of the end of the valley and Mackinnon Pass that we’d cross the next day.

Looking forward to Mackinnon Pass, some 700m above Pompolona Lodge

Each lodge has a laundry and drying facilities – although you’ve got to be quick to avoid a long queue and get first pick at where to hang your clothes. It was while we were waiting to wash some of our clothes we saw a rather large* avalanche! I’m glad it wasn’t any bigger, because it was on the mountain almost directly behind the hut!

(*It was quite a long way up. It was hard to tell exactly how big it was. Big enough!) 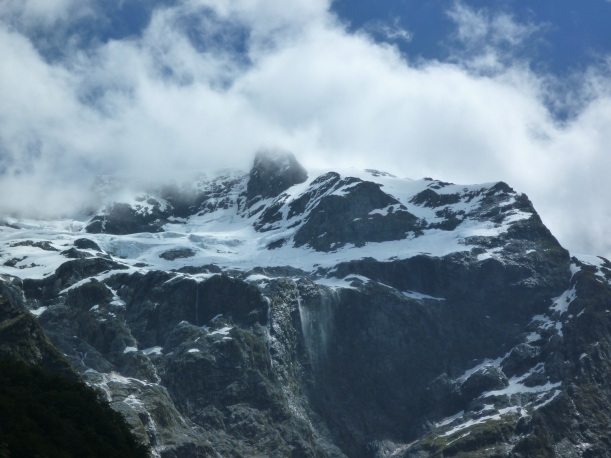 Not THE avalanche, but some snow falling off the side of the mountain not long after.

With our first proper walking day done, it was time to relax and psych ourselves up for the challenge of crossing over Mackinnon Pass tomorrow!

Day 3: We tackle Mackinnon Pass on the way to Quintin Lodge