The first day of every adventure is exciting. Day 1 of our turn to walk the world famous Milford Track had arrived and we were ready!

After a quick breakfast  headed down to the Ultimate Hikes office with our backpacks and an extra bag each of clothes and gear that would be sent  ahead to Mitre Peak Lodge for us. Browns very kindly allowed us to leave our luggage that we weren’t taking on the walk with them.

The maximum number of guests that Ultimate Hikes can accommodate in one group is 50, which makes for a lot of excited people milling around on the footpath waiting for the bus. We were going very early in the season and I think there were only about 38 guests in our group. 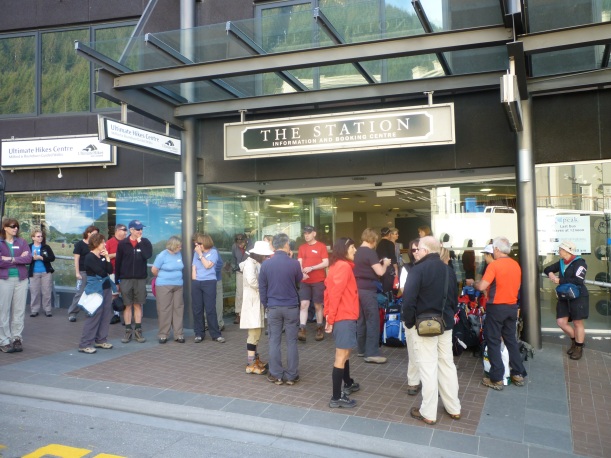 Ready for adventure! You can see the broad spectrum of hikers this walk attracts.

I’m sure we weren’t the only ones checking out the size of other people’s packs. I do remember there was one guest – a lady, mind you – who fit all her gear in a 25L pack! We’d both chosen to bring our own 80L  packs instead of borrowing a smaller one (40L) from Ultimate Hikes; mine weighed about 10-12kg and Stephen’s… well, let’s just say it was heavier.

The bus trip to Te Anau was about 2.5 hours. It’s not the most scenic drive in New Zealand – correction: the drive along Lake Wakatipu between Queenstown and Kingston is beautiful, but the rest is fairly unremarkable compared to the rest of what’s on offer in region. Sorry guys. All the same, I managed to take one classic New Zealand photo before the weather clouded over: 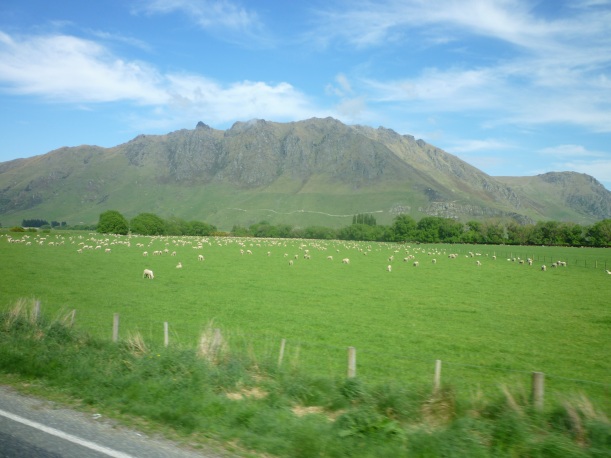 We had one stop at Mossburn for a comfort break and… icecream! There isn’t much to see or do there apart from those two things. It was overcast and not particularly warm, but just about everyone enjoyed a Tip Top icecream anyway. After all, why let the weather stop you? 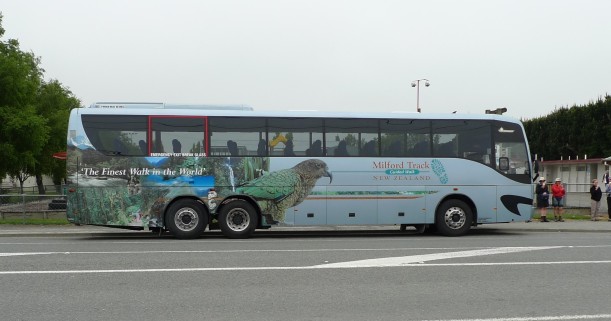 Lunch at Te Anau was very nice – Ultimate Hikes has an office attached to a hotel on the waterfront. If you’re looking for somewhere to holiday that’s like Queenstown but quieter, Te Anau could be just the place for you. Lake Te Anau is New Zealand’s second largest fresh water lake by surface area, and Australasia’s largest freshwater lake by volume. It even has three of it’s own fiords feeding into it! How’s that for impressive!

On the side of the bus you’ll notice the quote ‘The Finest Walk in the World”, and you may think that it’s a fairly bold claim that a marketing company sold to them. Well, not quite. Just over 100 years ago, a journalist was invited to walk the track and it was the title of their review of the walk when they got back to England that lead to the world-wide fascination with Milford Sound. Of course, since the astounding Homer Tunnel was completed in 1954 thus enabling people to drive to Milford Sound, it’s certainly been faster and more convenient for the masses to get to the fiord without getting their feet dirty.

From Te Anau it was a short bus ride to the boat at Te Anau Downs for the 1hr trip to the north end of the lake and the start of the Milford Track. 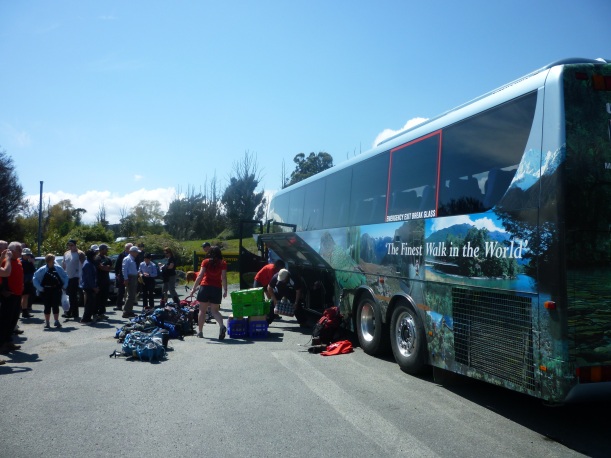 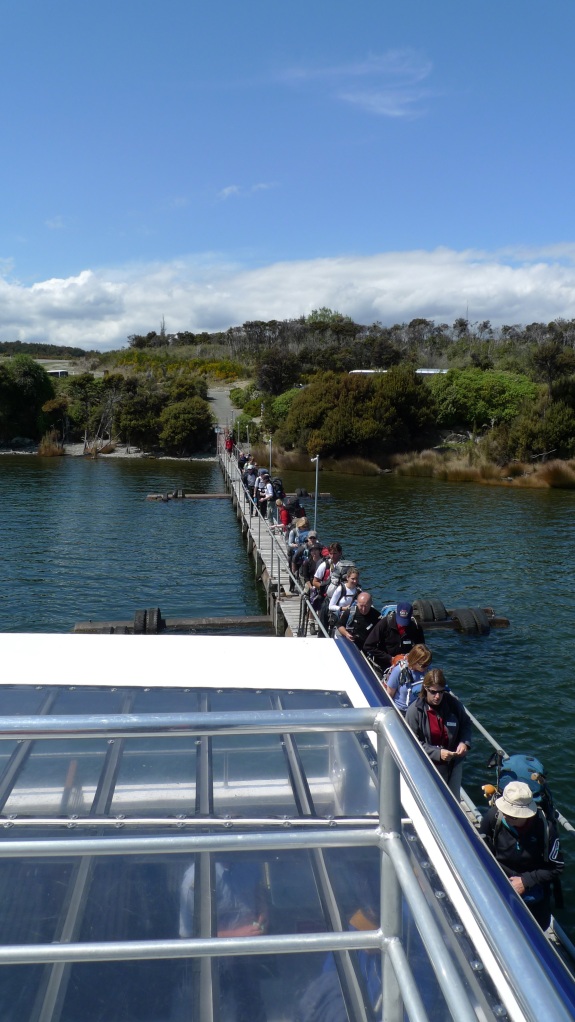 Our group plus a couple of independent walkers boarding the boat to the start of the Milford Track. 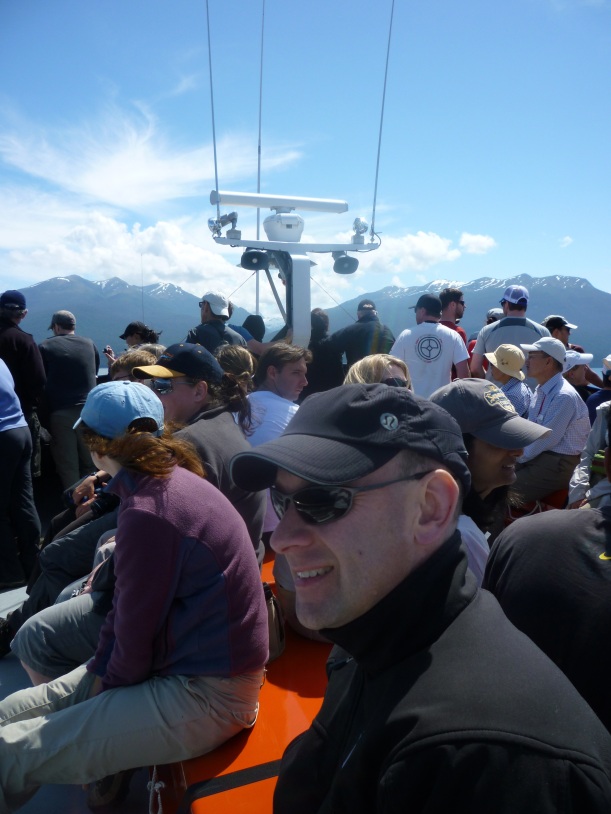 Naturally everyone wanted to be on the top deck since the weather was nice and sunny again! 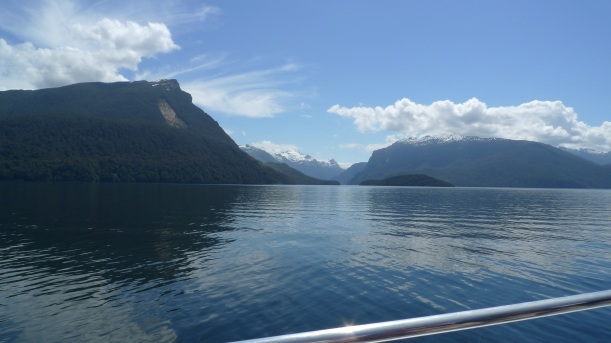 The scar on the side of the mountain on the left is due to a landslide. There isn’t much soil on the sides of the mountains; the trees roots entangle around each other for support as they grow. Thus it only take a few to come loose to take out a whole lot. 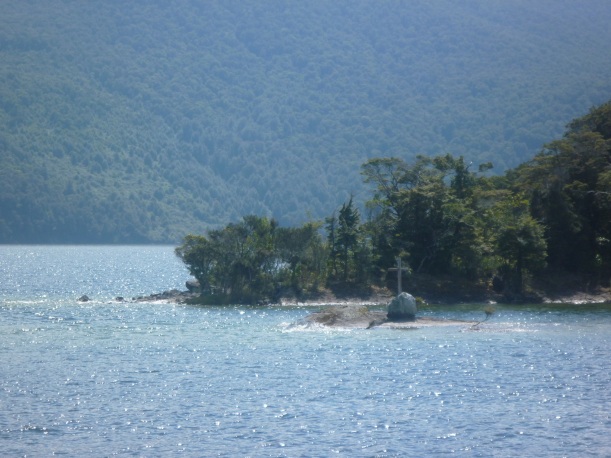 Quintin Mackinnon was the explorer who found the overland route to Milford Sound that we now know as the Milford Track. Several land marks along the way are named in his honour, including Mackinnon Pass (the highest point of the track) where there is also a memorial cairn, Quintin Lodge (night 3 with Ultimate Hikes), and Lake McKinnon. I believe it was Mackinnon who invited the journalist mentioned above  – he was keen to take guests along the track. He is greatly revered by the Ultimate Hikes guides and you learn a lot about him and what what conditions were like back then over the course of the hike, and get a really good appreciation for how much easier it is for us to do now!

The cross on that rock on that wee island in the middle of Lake Te Anau marks the place that Quintin Mackinnon’s (sometimes spelt “Quenton” and “McKinnon”) boat was found, wrecked after a storm in the last months of 1892. His body was never found so it is assumed that he drowned (apparently drowned people sink in fresh water). Given the lake extremely deep (the deepest point is 417m), a search – let alone recovery – was impracticable.

A summary of his life can be found here at TeAra.govt.nz – Quintin McKinnon

Anticipation grows – we’d be walking amongst these giants very soon. 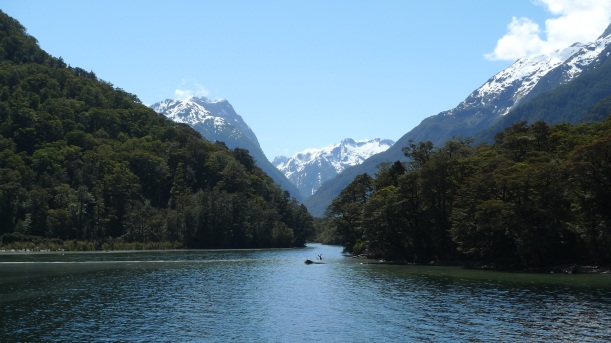 The Clinton River entering Lake Te Anau; there is a jetty just to the right of frame.

Within minutes of landing at the official start of the Milford Track, we realised that we hadn’t put on insect repellent yet!! So instead of waiting to get our photograph taken with the sign marking the start of the track, we headed off – if you keep walking the sandflies don’t bother you (of course, it helps if you’re not all standing around in a big group, too). 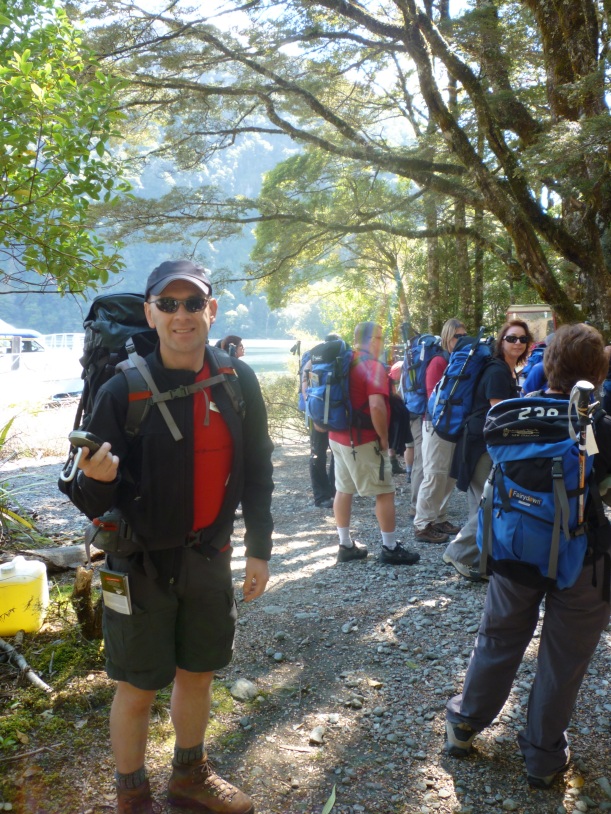 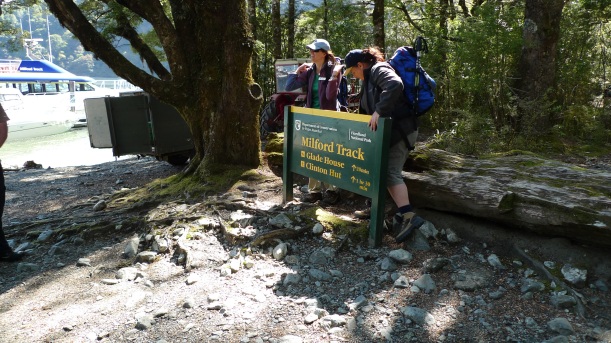 The start of the Milford Track. We didn’t hang around to pose for a similar photo.

There were a few independent walkers on the boat who disembarked and headed off before us – they had about 1.5-2hrs to walk to the first DOC (Dept of Conservation) hut, named Clinton Hut as it is in Clinton Valley. A maximum of 40 independent walkers can start the track on any given day.

Ultimate Hikes is the only company that owns private accomodation along the Milford Track. Our accommodation that night would be at Glade House, a whole 20min walk away. That would be our official 1 mile (1.6km) first day section of the track completed!

A note on measuring the track in miles: From what I remember our guides telling us, Quintin Mackinnon was paid by the mile to blaze the trail to Milford Sound. He used a Chain (an actual one made of metal links that was ‘one chain’ in length) to measure out the miles. At each mile he’d send back to town for payment, which I think came back in the form of provisions. There is a post marking each mile of the track, that also shows the kilometre equivalent on the other side. 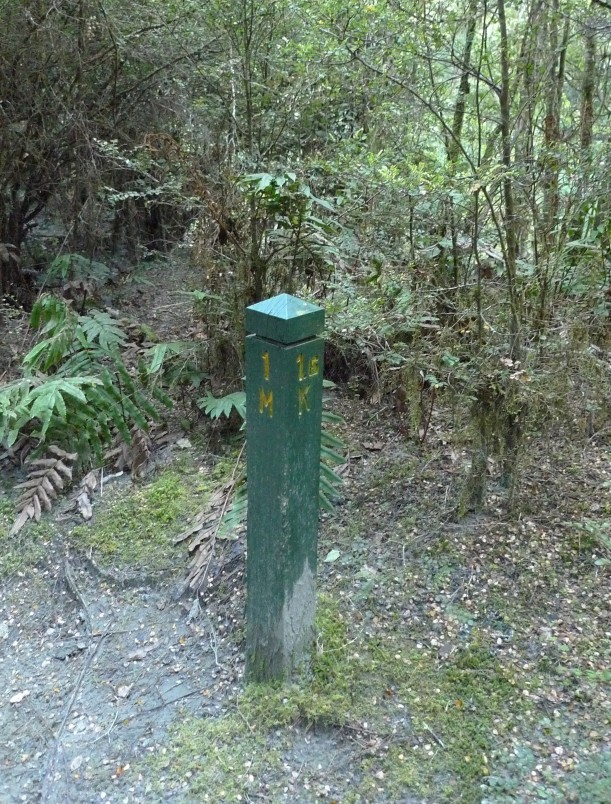 The first of thirty-two mile markers

After an easy 1.2km to Glade House (ok, not quite 1 mile on the first day), we dumped our bags and were almost late for the group photo! (which I’m sure I’ve got a copy of somewhere…) With the clear green Clinton River flowing in front of the house, Sentinel Peak rising beyond, and Dore Pass behind us, the view was pretty good! 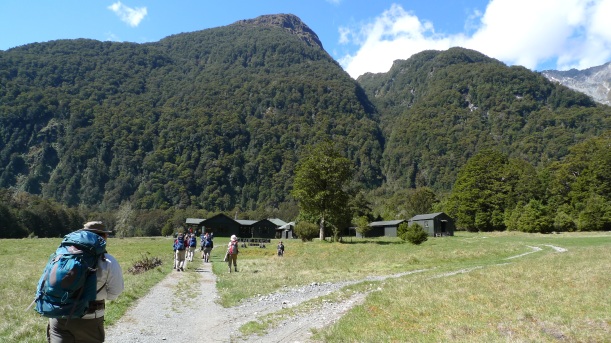 Arriving at Glade House. Dore Pass is the grey part at the top right of the photo. 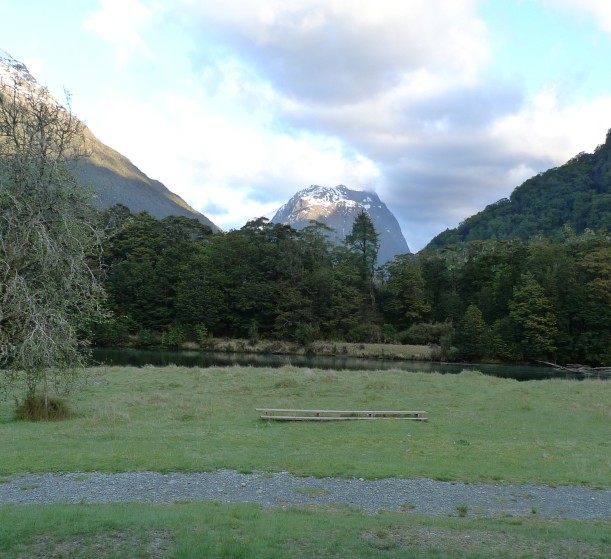 We then split into two groups for a nature walk – the guides gave us a brief overview of the plants and animals in the area. It was very interesting. We learnt that along with Possums the biggest feral animal threat in fiorland are ferrets who are indiscriminate killers. New Zealand has NO native terrestrial mammals (except for a few bats, and counting seals as marine mammals). Other feral mammals include 3 species of rats, cats, stoats, weasels, goats, various species of deer, wallabies, horses, hedgehogs! No wonder the native birds like the kiwi and kakapo (a flightless parrot) are under such pressure!

On the upside, they don’t have ticks and leeches! Don’t know how that came to be, but it’s fantastic! The abundant sandflies almost make up for their absence though. 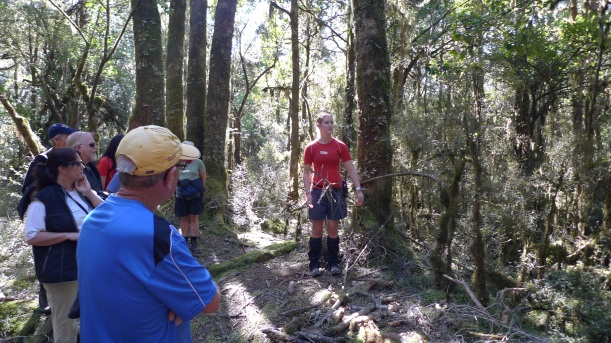 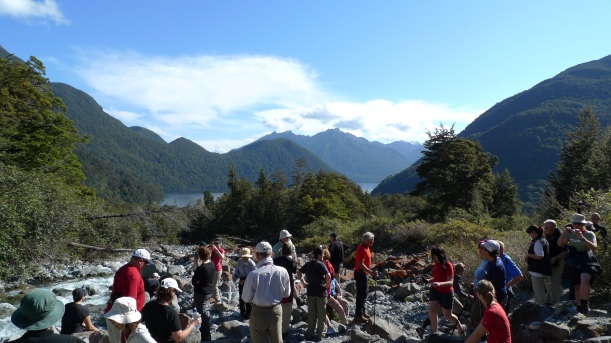 As short as this walk was, it gave some guests a much needed opportunity to get to grips with the walking sticks they’d encumbered themselves with. 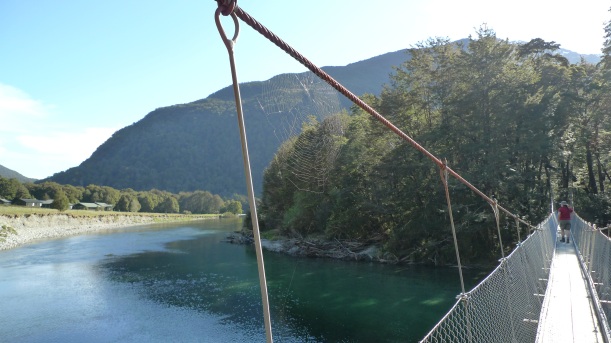 After everyone had made it back from the walk and wandered around a bit, it was time to gather in the lounge room for afternoon tea, a ‘getting to know everyone’ session which wasn’t too bad, and the evening power point presentation of what to expect the next day. 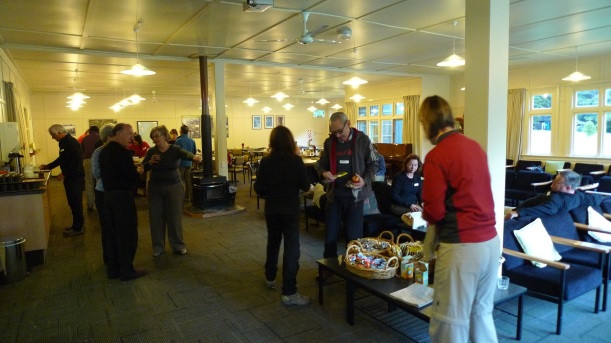 The Lounge area at Glade Hut. The dining area is towards the back of the room.

It turns out about ¾ of the group were Australian (mostly from Melbourne/Vic and Brisbane/Qld); of the rest there were 4 Japanese, 2 Indian ( a couple on their honeymoon), 2 American, 5 Kiwi’s (one who has lived in Perth for years but still thinks of himself as Kiwi, and the 4 guides) and one girl from Norway(?). 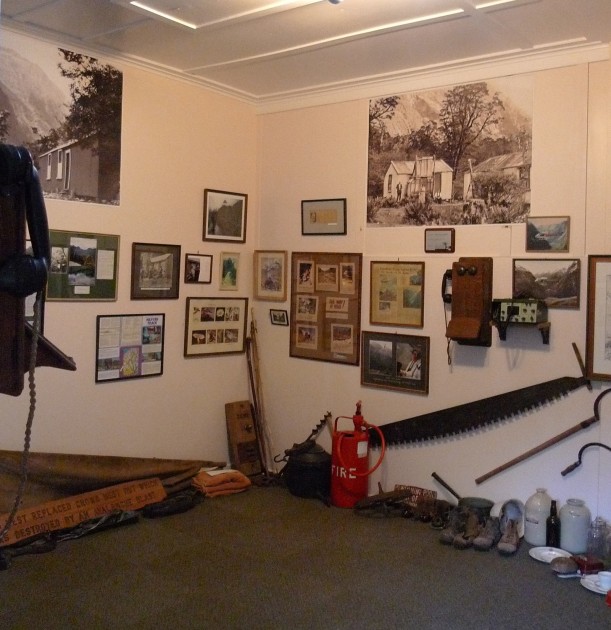 Each night we had a choice of two main meals – they’d pass around a list the day before (or at our lunch stop back in Te Anau on the first day) for you to indicate your preference so they can call ahead to let the lodge staff know how much to cook. It took the surprise away, but I guess it’s efficient for them and possibly reduces complaints from fussy eaters. The portions were a little on the small side, especially after a long day’s walk (certainly not the case on the first day), but there was salad and plain rice provided that you could help yourself to. Still, a 3 course meal of real food (more than freeze dried veges and noodles) that you didn’t have to cook yourself is not to be sneezed at, and we polished it off! 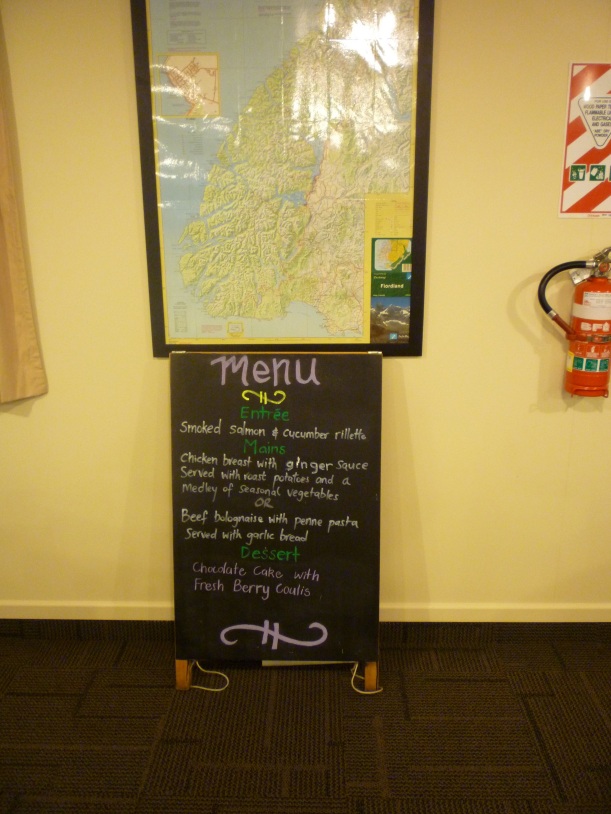 A map to show you how far you’d come (or how far there was to go) and menu options.

Our room that night had no view – I was happy enough that it was out of the way and people weren’t walking by our window! 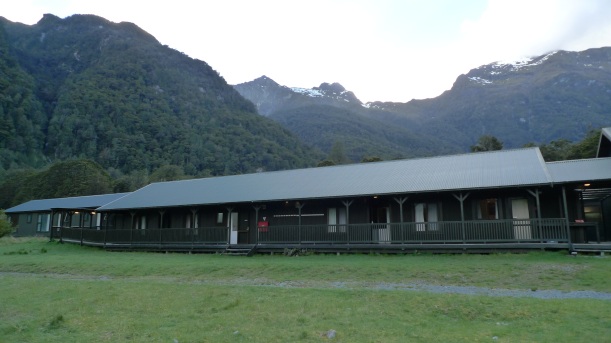 The rooms at the front are the multi-share bunk style rooms. Our room was at the back of these.

The generator gets switched off at 10pm; they recommend that you leave your light switched on, so when the generator is turned on of a morning the lights coming back on act as your alarm clock. Not a bad idea! Being able to recharge my camera battery was appreciated, but until it went off the noise of the generator spoiled the serenity somewhat.

I don’t know how eco-friendly or green the houses/lodges are. I guess they don’t have to worry about water since they get 7-9 metres of rain per year, but flushing loo’s, no time limit on showers, fresh linen each day (I assume they must either wash and dry it all on site or fly it out), big kitchens, a big generator, regular helicopters transporting stuff in and out – it’s very commercial and a bit wasteful, in a way. At the same time, I recognise that it’s only way they can provide a consistent, quality experience for each person in each group that arrives each day. So many people want to come and see this place – I don’t know how they would operate it differently and still make the track available to so many people of different abilities.

Day 2: We walk from Glade House up the Clinton Valley to Pompolona Lodge.

Back to:
Pre Milford Track Walk