As with all our Tassie holidays, this one started aboard one of two passenger and vehicle ferries that share the name the Spirit of Tasmania. The ferries run daily between Port Melbourne and Devonport.

If you want to see what you’ve been missing by flying to Tassie, have a look at my How to get to Tasmania page.

We’re not the only large ship on Port Phillip Bay

You can photograph the sunset (in summer)

After a relaxing night onboard, we were up early and on our way. Breakfast was at ETC (Elizabeth Town Cafe) a traditional stop for many travellers heading towards Launceston or Hobart from Devonport. If there’s one thing you can count on in Tassie it’s a decent breakfast.

It’s not far from Devonport to Launceston – only 100km along the Bass Highway. Our plan was to then drive up the west side of the Tamar River, cross Batman Bridge (no, not the Caped Crusader – this Batman) and explore the eastern Tamar Valley. 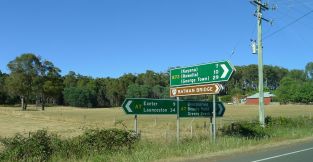 There are vineyards all around this region and you’ll pass many if you take a drive. Mind you we were passing before 10am – way too early to stop – and we had a wine tour booked in a couple of days time anyway. We did buy some pretty good cherries from a road side stall (actually just a ute with some big esky’s) – the bonus of driving around in summer time! I LOVE summer fruit!!

We came to Bridport and it looked so good we decided to stop. We’re not beach-goers. Quite the opposite, actually. Yes, there are beaches in Victoria; some not that far from home. But I haven’t forgotten that I am from Queensland, and every now and then – like on that gorgeous Australia Day at the beach in Bridport – I just had to feel the sand between my toes and the water around my ankles. Who could resist this? 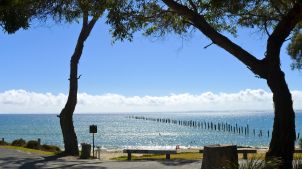 Picnic table with a view

I love exploring around rocks

Close up of the orange on the rocks

Australia Day at the beach

The patrolled beach at Bridport

Having squeaked across the dry and padded across the damp sand, wet our feet in the clear Tasman Sea and clambered among the rocks to our satisfaction (almost) and haven taken plenty of photos, we washed and brushed off the sand as best we could and continued on our way.

We turned south to Scottsdale to see if we could find where Rhubru is made – no luck – but we saw plenty of rhubarb in the fields, and a number of fields of poppies, ready for harvesting, protected by their electric fences. 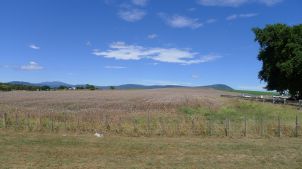 Not included in the Pick-Your-Own scheme

Next stop was Bridestowe Lavender Estate. Their website says the best time to see the lavender in flower is December – January. Right-o, we were at the tail end of January but there was still almost a week before the end of the month… we were hoping to get some fantastic photos like the head photo on their website.

It’s an interesting fact that you can’t actually see the lavender fields from the main road, or from the driveway – in fact, not until you’ve paid the entrance fee and get to the car park. We felt somewhat cheated to discover that the majority of the lavender had already been harvested. There were just a couple of rows left that we didn’t exactly have to queue up to photograph… but almost. We did the best we could. The other two things worth seeing (if you’re there anyway) are the old oak trees that were planted in 1881. Over 130 years old! Their shade is quite welcome on a warm summer’s day.

Not what we were expecting

The best I could manage

We ate at the cafe (a Lavender spiced sausage roll and a bottle of Rhubru went down quite well) then bought some lavender products in the shop (for our mums mainly, and some cooking lavender for us) then headed back to Launceston to check in at The Sebel Launceston.

Our dinner reservation was at Black Cow Bistro, an old art deco building that used to be a butchers shop, just a short walk from The Sebel. We’d been wanting to try the Black Cow for a while and I’m pleased to report that it didn’t disappoint.

It was still reasonably light after dinner so we took a walk. There are plenty of interesting buildings to look at around the CBD.

Ben Lomond National Park is not just a pleasant, but a fun drive about 1hr southeast of Launceston. Despite its convenience, its also the least visited NP in Tas, with most people visiting during the winter months to ski.

As with much of Tasmania, the ancient plateau is dolorite and to the casual observer does give the impression of being dry and pretty barren. Nothing could be further from the truth though. The bare ground squelches underfoot where it’s not running with water.

Rolling hills just out of Launceston

Start of the Legges Tor circuit 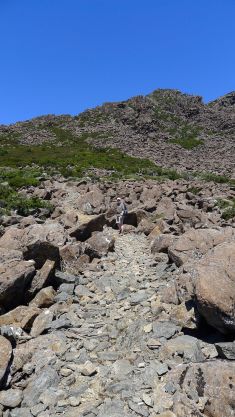 Another wildflower – can anyone help with names?

Track across the boulder field

A common wildflower on the plateau 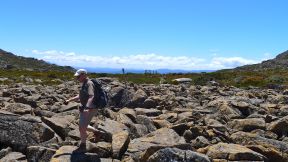 View north to Jacob’s Ladder in the cleft

View south-west across the plateau

Lunch stop. The table was unexpected but appreciated 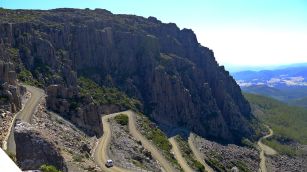 Warning at start of ascent of Jacob’s Ladder

We were following a track from Legges Tor to the Ben Lomond summit, then back via the road, as described in Day Walks Around Tasmania book by J & M Chapman. Someone from Tasmania’s Parks Service has at some point gone to a lot of trouble to create a path through the boulder field below Legges Tor! We certainly appreciated their efforts!

There are a couple of private huts of decent size at the top – one at the summit was even for sale!

A cairn marks the summit (incase there’s any doubt?). I can’t say the view is particularly spectacular. There’s a lot of plateau in every direction before you see other mountains in the distance. But we felt a sense of achievement nonetheless.

We checked out one of the ski runs – looks a bit rocky in the summer – then headed down to the road to head back to the car.

The most notable feature of the walk is Jacob’s Ladder. A series of steep switchbacks up the mountainside. So glad we were walking down, not up this part. Definitely scenic viewing! Also a place many cars have trouble traversing in winter! Given the number of potholes, we were glad we’d left the Mini behind at the earlier carpark!

It wasn’t a hard walk back to the car but it felt long enough. It was a good day’s hike.

Dinner was at Stillwater that night, the top class restaurant on the ground level of the Old Mill at the mouth of Cataract Gorge, just next to Kings Bridge. We have dined here (breakfast and dinner) a number of times before and it was as good as ever. It’s also a pleasant walk along the water front from The Sebel to get there.

Following the water to the Old Mill at the mouth of Cataract Gorge next to Kings Bridge, Launceston 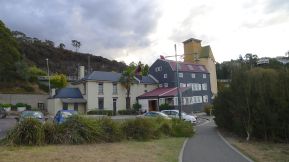 Today we tried something we’d never done before… a wine tour. Does that surprise you? Yes, we’ve stopped at a couple of wineries in the past, but one of us (ie Stephen) has always been the driver, so it’s not really the same.

We were picked up from The Sebel – I wasn’t going to book a tour that couldn’t pick up & drop is back at our hotel – by Marcia from Valleybrook Wine Tours. The Tamar Valley wine region can be broken down into smaller areas – east, west, south – and due to the number of wineries in each area tour will usually visit cellar doors in just one of these areas. We visited wineries in the West Tamar Valley area.

Marcia was a great host and we all really enjoyed our day visiting the following cellar doors/wineries: 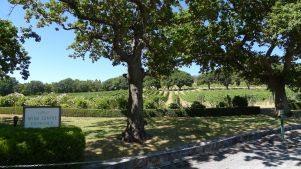 Lunch stop with a view of the Tamar River

Our group at Grey Sands Vineyard

By the end of the day we were well and truly done – and didn’t miss not having dinner that night. Next time we feel so inclined, we will only book a half day tour. Marcia was a great host and I think the whole group had an enjoyable day. The original plan was just to visit 5 clear doors, but a late request (by us) got Grey Sands included. We really appreciated going to Grey Sands, but it did unfortunately mean that by the time we got to Goaty Hill we were not in much shape to really appreciate the wines as we had at the start of the day.

Moral of the story? Don’t chose a wine tour by how many stops you do, but by where those stops are.

After checking out, it was back on the road. We had a few favourite stops to make.

Breakfast at Stillwater, olive oil at Evandale, jam and sauces at the Tamanian Gourmet Sauce Co just outside of Evandale on the way to  the Cherry Shed at Latrobe where were had a pretty good cheery ice-cream and bought 5kg of fresh cherries, then finally Ashgrove Cheese at Elizabeth Town (see also my pages Midlands and North Coast Towns). Phew!

After a wonderful long weekend, we were back on the Spirit of Tasmania for the overnight ride home. I had a fresh change of work clothes for the next day so Stephen would drop me off at Melbourne Uni to catch a tram to work then he would take the gear home and unload the car before going to work himself. Not a bad arrangement, really.