The forecast had been for showers today, so I was pretty relieved when I woke up and didn’t hear the unmistakable sound of rain drumming on the roof. I’m not sure that everyone in our group was quite so lucky, but despite the weather (this IS Melbourne after all – if we only planed activities around ‘good’ weather forecasts nothing would happen for 8-9 months a year!) we had a pretty good turn out.

So good, in fact, we doubled the number of Bromptoneers we’d had on our inaugural ride! Not bad, hey?

We managed to turn a few heads of passers-by as we met on Webb Bridge (a popular pedestrian and cyclist bridge over the Yarra River at Docklands). Is it wrong to say that most Brompton owners like taking snaps of their Brommies? Well, as soon as I saw what Cory was carrying, I knew I didn’t have to worry about being the unofficial photographer for this ride. Besides, I’ve seen some of his photos previously; he’s got an eye for it. (There’s a link to his photos at the end of the post.)

After numerous of photos were taken and all riders were present and correct, we set off to Port Melbourne. It’s only about 4km to Station Pier and once we’d picked up the bike path around the back of the Melbourne Exhibition Centre the path follows a tram (aka ‘light rail’ to most of you non-Melburnians) track all the way to Station Pier. Early on the bike path twice crosses tram tracks, and there are a couple of road crossing, but otherwise it’s a pretty cruisey ride. 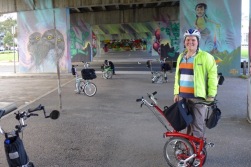 Dayna and her red Brompton under the Graham St overpass 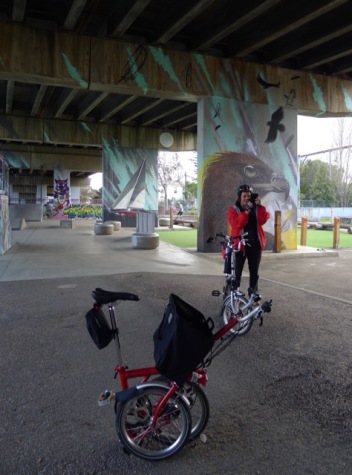 Siewmee in front of some outstanding artwork at Graham St overpass

Continuing on toward Station Pier and Port Melbourne

At Station Pier we turned left and rode the short distance along to Princes Pier. A known fishing and photography spot (some people even combine the two) it was a joy to spread out and cycle along the smooth, wide concrete jetty. I’d never been on this pier before – I’d only seen it from inside the Mini as we’re queuing the board the Spirit of Tasmania docked at Station Pier to the east. Time for more photos, surely?

A line-up at Station Pier

Not dallying too long, as a couple of our riders had limited time, we back-tracked slightly to ride by Station Pier to continue down to St Kilda Pier for a hot drink (and possibly a treat) at the Pavilion.

Bromptons at Port Melbourne, with the Spirit of Tasmania in the background

A quick stop for photos just on the other side of Station Pier, with the Spirit of Tasmania in the background, then Cory and Greg had to depart (Greg would meet us at St Kilda Pier later). 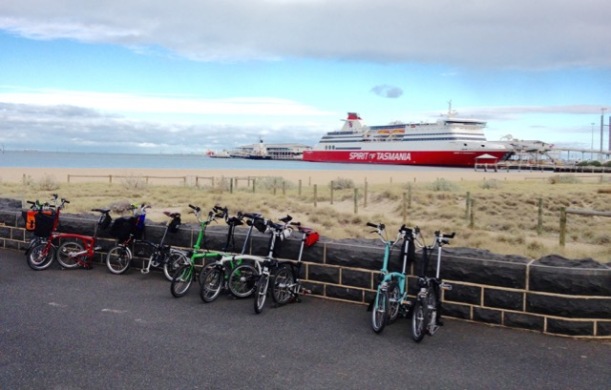 Bromptons at Port Melbourne, with the Spirit of Tasmania in the background

Setting off, there was even a hint of sun and blue skies as we rode along the flat cycle path along the foreshore, making the beach and Port Phillip Bay look very enticing, indeed! Plenty of folk were out enjoying the day – other cyclists, walkers, many people with dogs, some people swimming  or playing sports on the sand.

People playing sport on the beach at Port Melbourne

It’s usually a bit windy down by the bay, but we hadn’t really appreciated just how windy it was until we turned to ride out along the pier! It’s a good thing my helmet’s strapped on! I wonder what it’s like when there’s a strong wind warning for the bay? Golly! 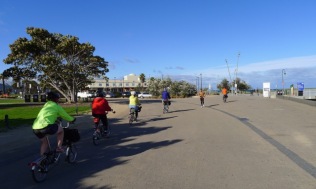 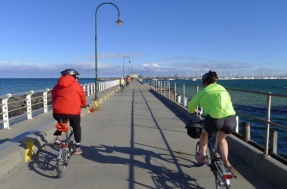 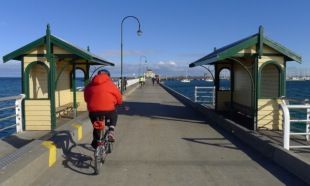 Fortunately there weren’t too many people around at the Pavilion, and we didn’t create a nuisance of ourselves as we lined up to take more photos. We even managed to grab a couple of tables and sat down to enjoy a hot beverage and chat while we waited for Greg to rejoin us. 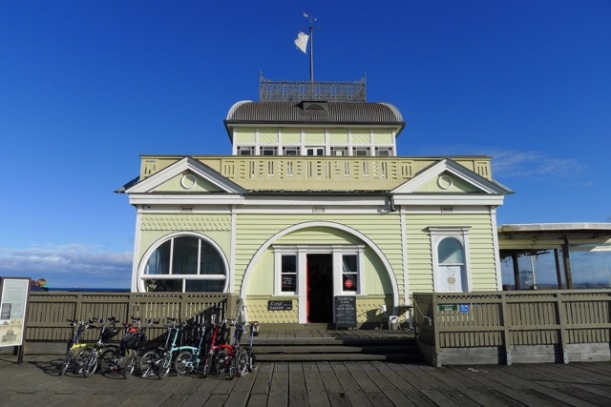 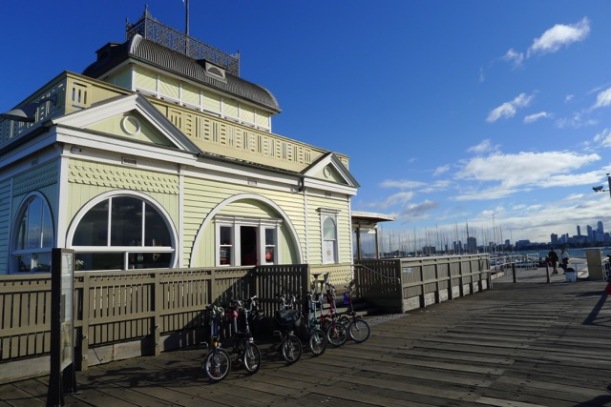 Looking back to the city from St Kilda Pavilion

All good things come to an end, and soon enough it was time to ride back to the city. Unfortunately Greg and Siewmee said goodbye as we left St Kilda Pier, so we were down to five Bromptoneers. Heading back up the beach was all into the wind – I’m sure I’m a bit windburnt on my face from that 4km stretch. Shedding a layer (down to two) I was not disappointed to head inland and follow the more sheltered bike path by the (Route 109) tram line.

The heavens opened and we were rained on as we neared the end of the line – but only gently and briefly, and just enough to prompt a couple of slightly adulterated lines of ‘singing in the rain’ from Elsie and I. Well… she started it!

Back at the Exhibition Centre it was our turn to peel off from the group. Stephen and I were turning right and heading home through the city – the others (Stanley, Elsie and Bethy) were heading left to go home. So then there were three.

It was another great day, and a real pleasure to have more members along on the ride. Keep in mind that you don’t have to be a Brompton owner (yet, anyway) to join us – you just need to be interested and not mind that we love our Bromptons!

To see some REALLY good photos from this ride, have a look at Cory’s photos for the Melbourne Brompton Club on Flickr. Stanley has also posted his photos on the club’s Facebook page.

The best way to keep up to date for future rides and activities is via the group’s FaceBook page, but we also have Twitter and Strava accounts.