We’ve been talking about checking out the Organ Pipes National Park ever since I started visiting Melbourne somewhat regularly back in 2009.

I can’t tell you the number of times we’ve driven by it, but in our defence, there’s not much to see from the road because it’s mostly below the level of the surrounding Keilor plains. I have probably taken off over it from Melbourne airport just as many times for that matter, and looking down, marvelled at how the land just seems to fall away into these gullies and chasms.

Organ Pipes NP from the Calder Freeway – easy to overlook

The catalyst for this (our first) expedition to the Organ Pipes NP was a post on Parks Victoria’s Facebook page saying “Ranger Joe” had – at considerable personal effort – made two new tracks with hand-held tools. Due to various factors using machinery wasn’t possible.

It’s a small National Park of just over 120 hectares (~300 acres) although the walking tracks that we found seemed to be concentrated to an even smaller section of this area. The geological feature, the basalt ‘organ pipes’, that gives that park its name was formed by very slowly cooling lava a few years back (about a million years, give or take) that spilt into vertical columns as it cooled. The other park features have also formed in the same way. Parks Victoria have put together a very interesting history of the park here. 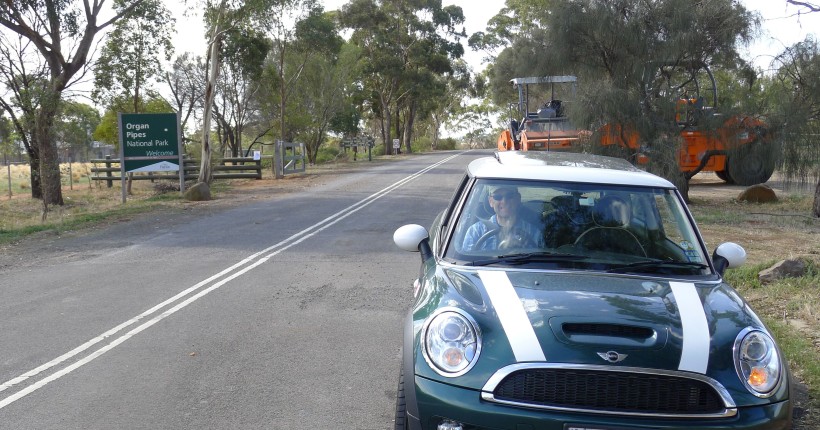 We found we weren’t the only ones taking advantage of the lovely autumn day. There were quite a few cars in the car park. And it wasn’t long before we realised just how close the park is to Melbourne’s Tullamarine airport! 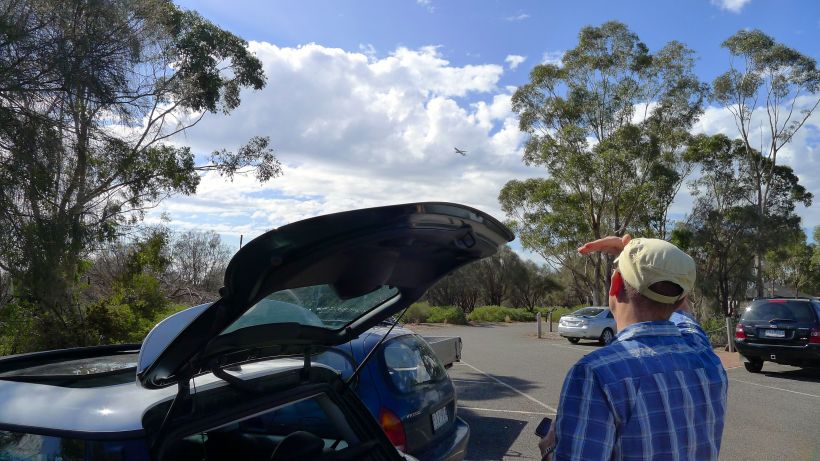 At the car park, watching a plane taking off

So if peace and tranquility is what you’re after while communing with nature, you’d be best to chose another spot. 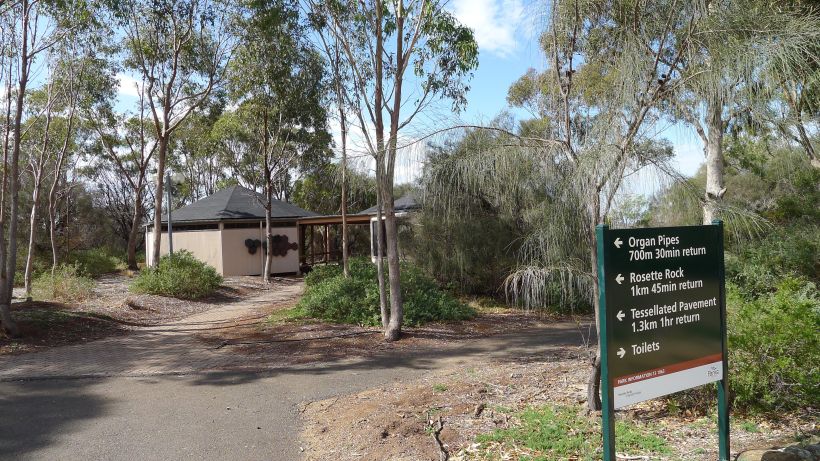 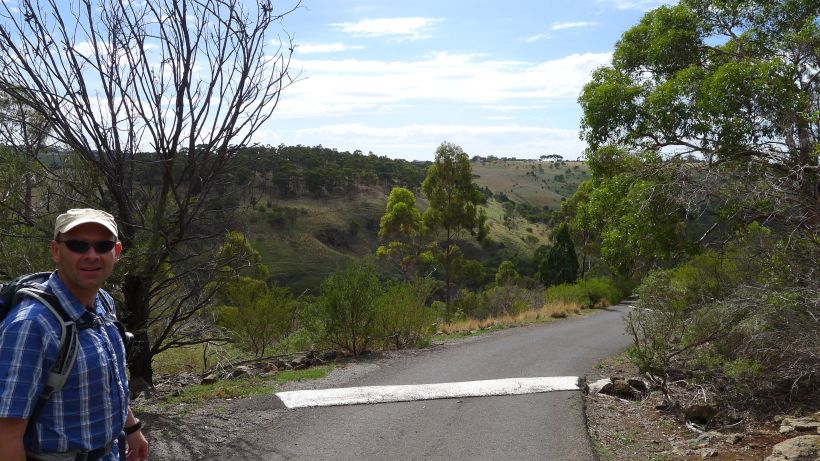 Heading down the management track

Not sure if this is the proper way to go down, but it’s the way everyone else was going down & coming up, so… 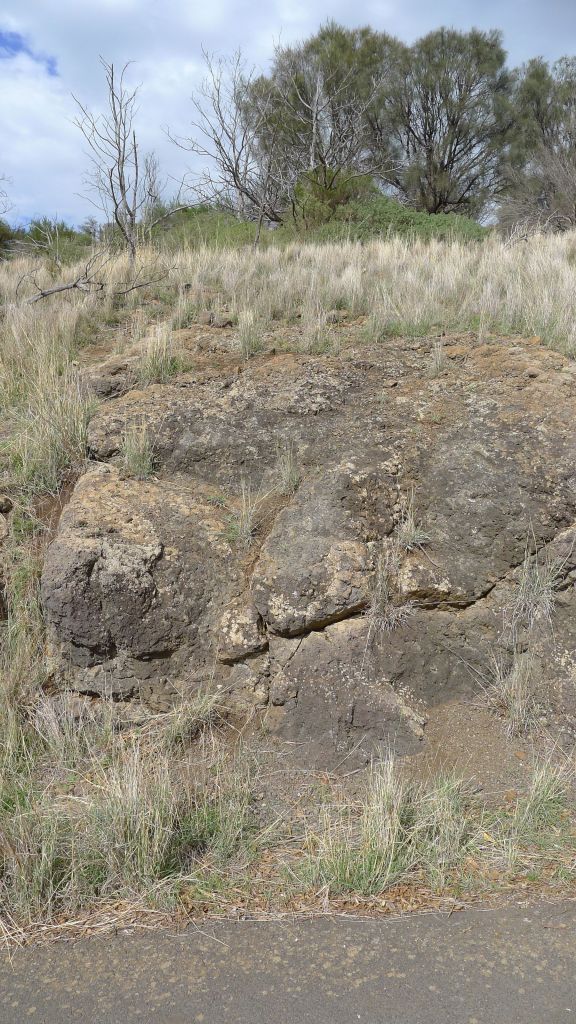 I guess this is volcanic rock and soil. Looks tough to grow on. 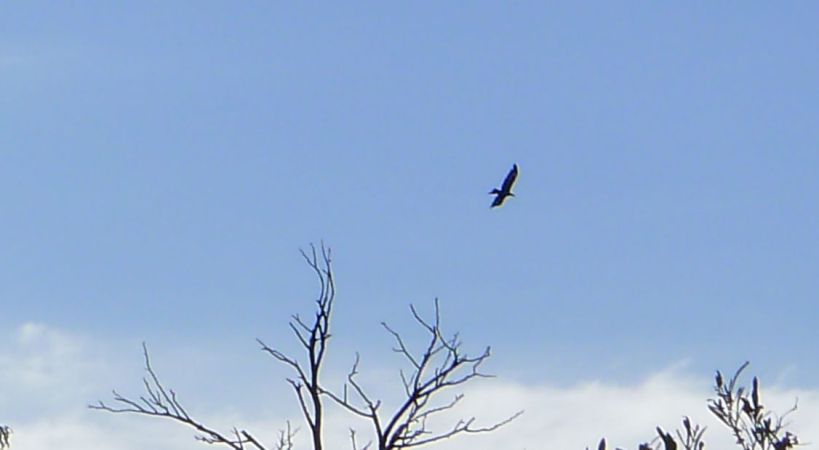 We were quite pleased to see three Wedge-tailed eagles today. That’s always something special for us city-folk. 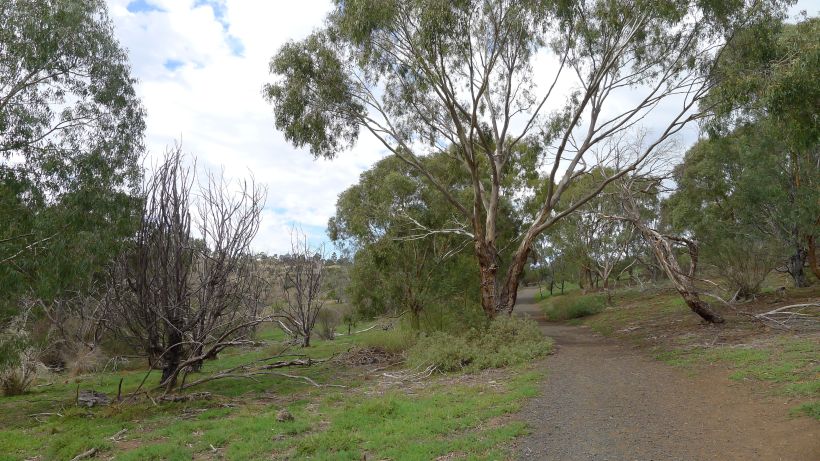 We’d reached the bottom of the hill. This is what the track is like – pretty cruisey. There are a lot of dead trees in some parts – I’m not sure if that’s Parks Victoria killing off non-native species or something else. The eucalypts looked healthy enough. 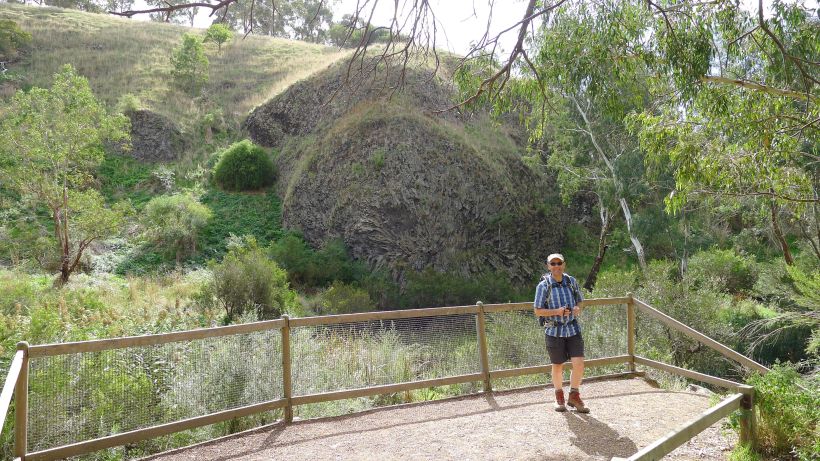 Stephen in front of Rosette Stone

First landmark ticked off within about 1min of getting to the bottom of the hill – the Rosette Stone.

Close up of Rosette Stone

Instead of forming vertical columns, here the basalt has somehow formed a structure that looks like the spokes on a wheel. 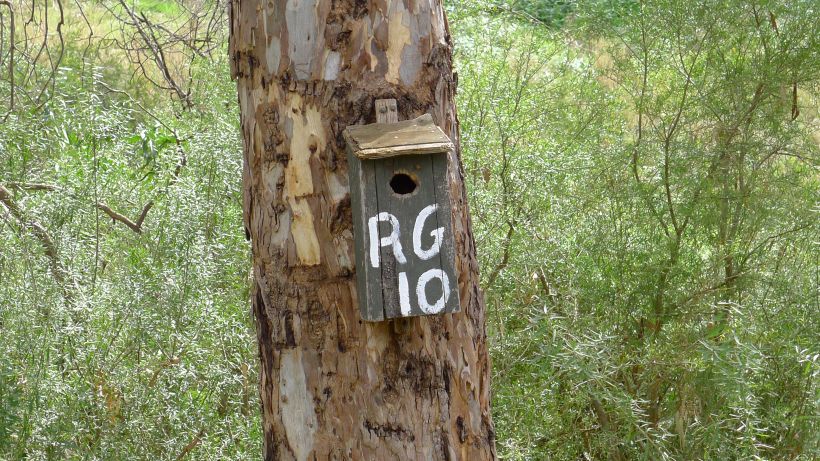 Is it a bird box? A possum box?

We saw lots of these boxes. I don’t know what RG stands for. River Red Gum? Sugar Gliders have been reintroduced to the area, so maybe some of the boxes are for them. Not all the boxes are the same size – nor have the same sized holes, nor are all the holes located at the front of the box. 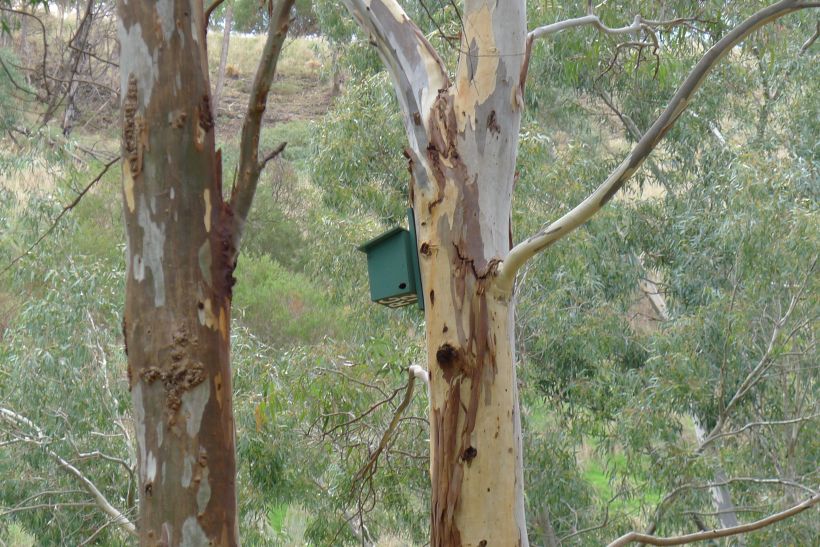 RG12 – obviously for a different species than for RG10

This one had a logo of a wedge-tailed eagle with words that I couldn’t make out on the front.

There are (or at least used to be) bat roosting boxes in the park. We didn’t spot any today, but I hope there is still good populations of bats in the area. There were 7 species of micro bats recorded by R Irvine & R Bender in 1995 – see ‘Initial results from bat roosting boxes at Organ Pipes National Park‘.

Next attraction on the bill (about 100m or so away) was the Tesselated Pavement. (Pavement – how exciting does that sound?) 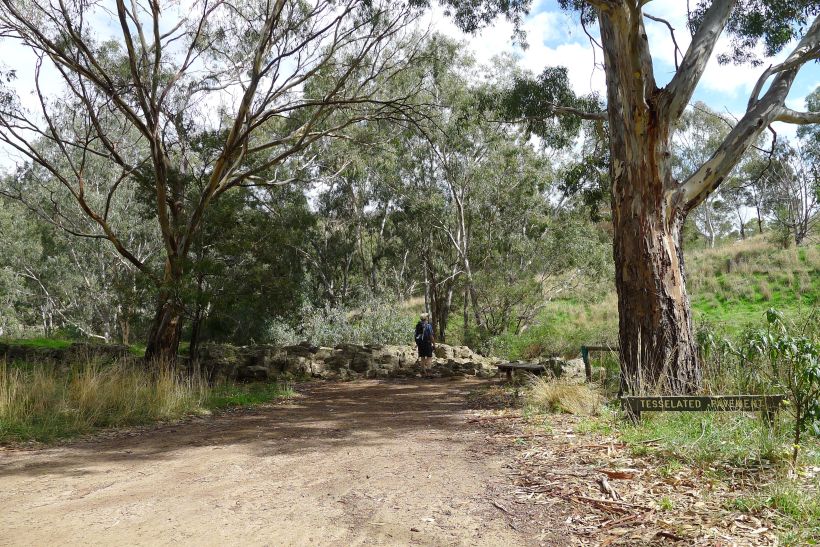 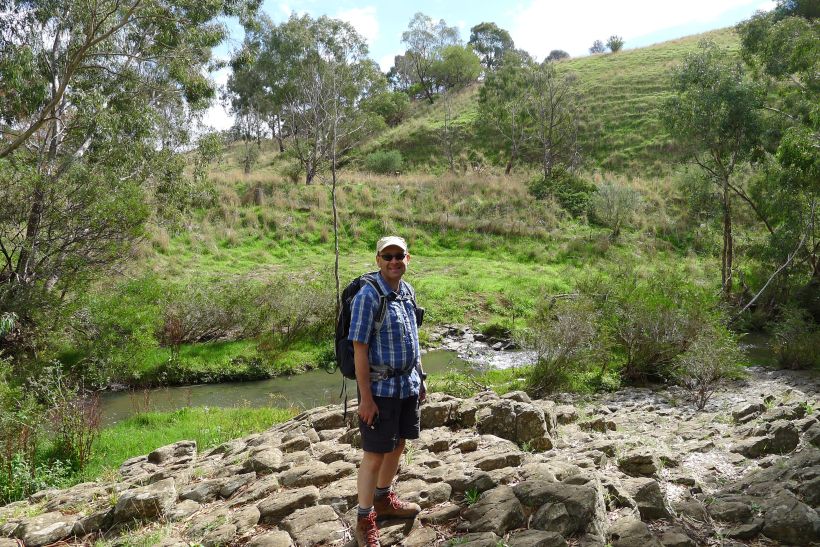 These stones were formed in the same way that the formation known as the Organ Pipes were (that we’ll get to next), but have been worn down from the top by the action of the creek flowing over them. 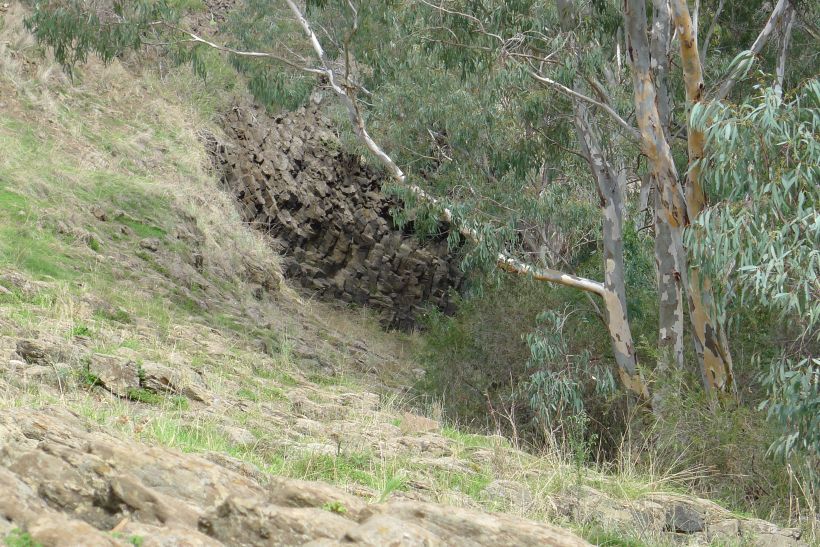 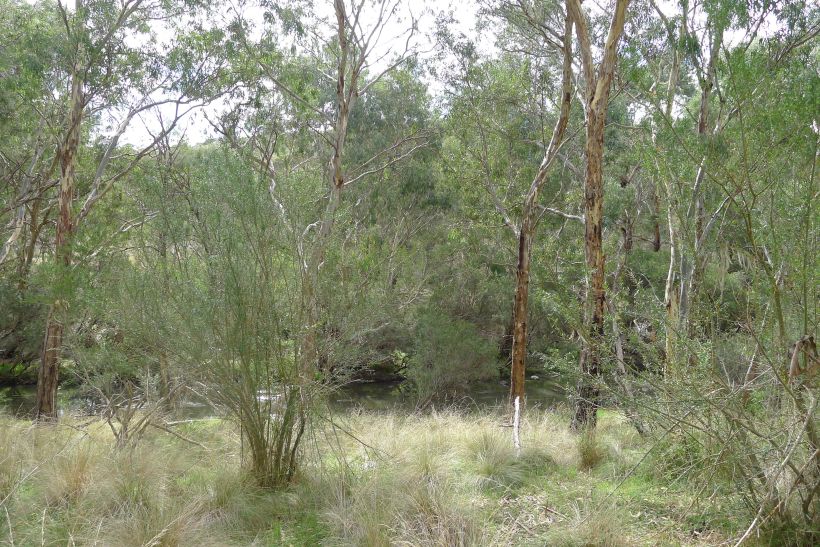 It’s quite nice along the creek 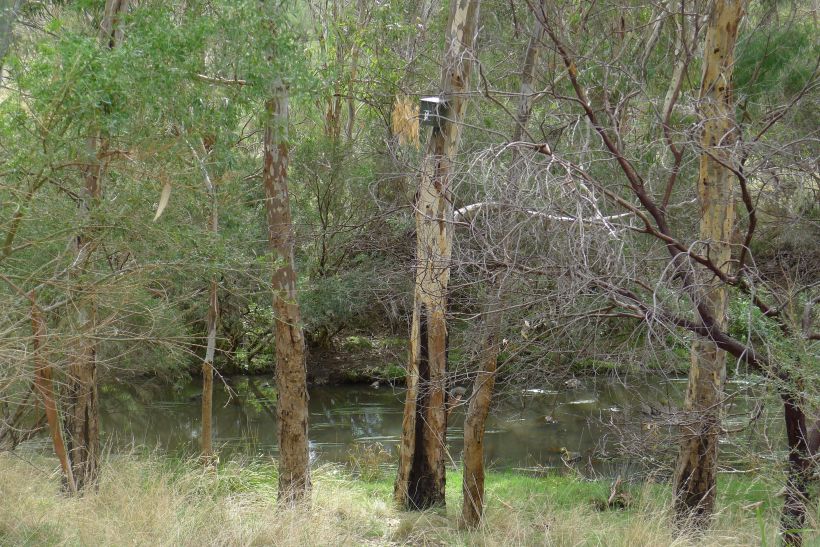 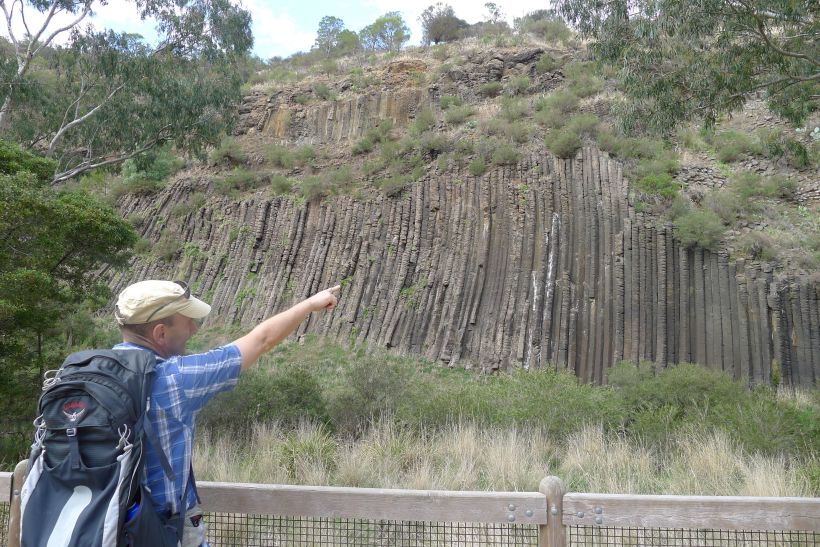 Each ‘pipe’ would probably be up to about 50cm across

We’d now ticked off each of the ‘must see’ features of the park. Still no sign of the new tracks. There is another path that follows the creek around further, but it appears to be a dead-end, so we headed back up to the car park. 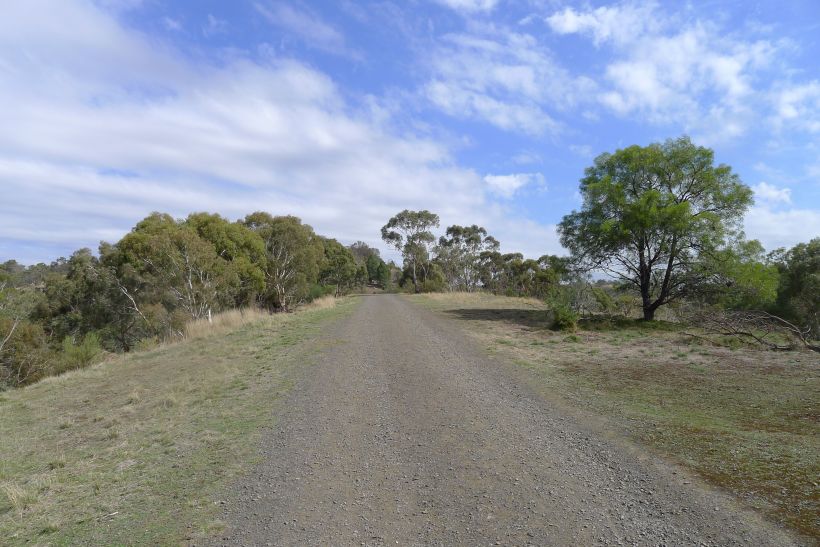 It’s not too steep walking back up, and not too far. Our whole walk had taken almost right on 45min. Here’s a map of our route. 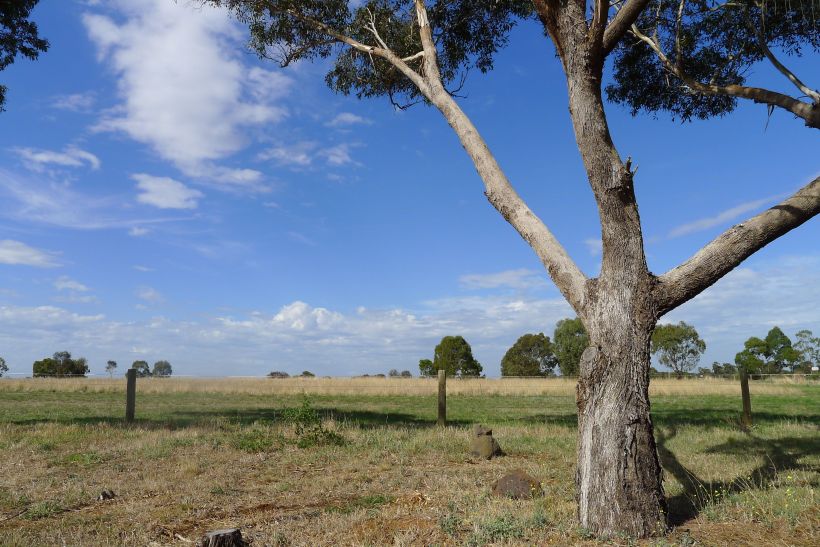 View to the left exiting the park

Although it was only a short outing, we left feeling like we’ve now ticked that park off the list, and slightly disappointed that there weren’t any signs indicating “new tracks this way”.