Ok – here’s the bad news straight up. There’s no hiking on the 5th day. Well, I say ‘bad’ news, but by this stage a lot of the group think it’s actually a wonderful thing! On the up side, here’s the view you could wake up to: 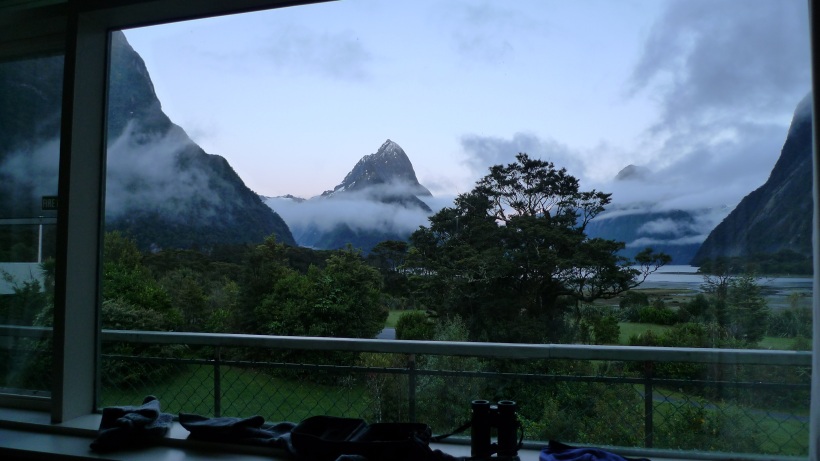 The reason Ultimate Hikes make this a 5 day experience is because once you’ve walked all the way to Milford Sound, who’s NOT going to want to go for a cruise out on Milford Sound before going home? The bone of contention is when people realise the advertised 5 day / 4 night guided walk includes only 3 full days of actual hiking in the wilderness. But damn it’s worth it!

The clouds that float around the mountains are fantastic. The many moods of Mitre Peak – we were lucky to see it in such spectacular form.

Everyone had packed an extra change of clothes in an overnight bag that Ultimate Hikes had sent on ahead from Queenstown on Day 1. Not having to wear the same hiking gear for the 5th day in a row – on the last day when we weren’t even hiking – was very nice.

Of course, you do have to do a wee bit of walking today – from your room to the bus, from the bus to the ferry, around the ferry while taking photos… you get the picture.

Local Maori tribes used to visit Milford Sound, that they called Piopiotahi (after a now-extinct bird) to collect pounamou (greenstone) to make into tools and jewellery. They walked the same route through the mountains as we did, over what is now known as Mackinnon’s Pass. Read more here.

No matter who you travel with, there are a few things every boat operator on the Milford Sound will do. One of them is going right up to a waterfall cascading down the side of a cliff… one might even say under it!

Having a shower, Milford Sound style 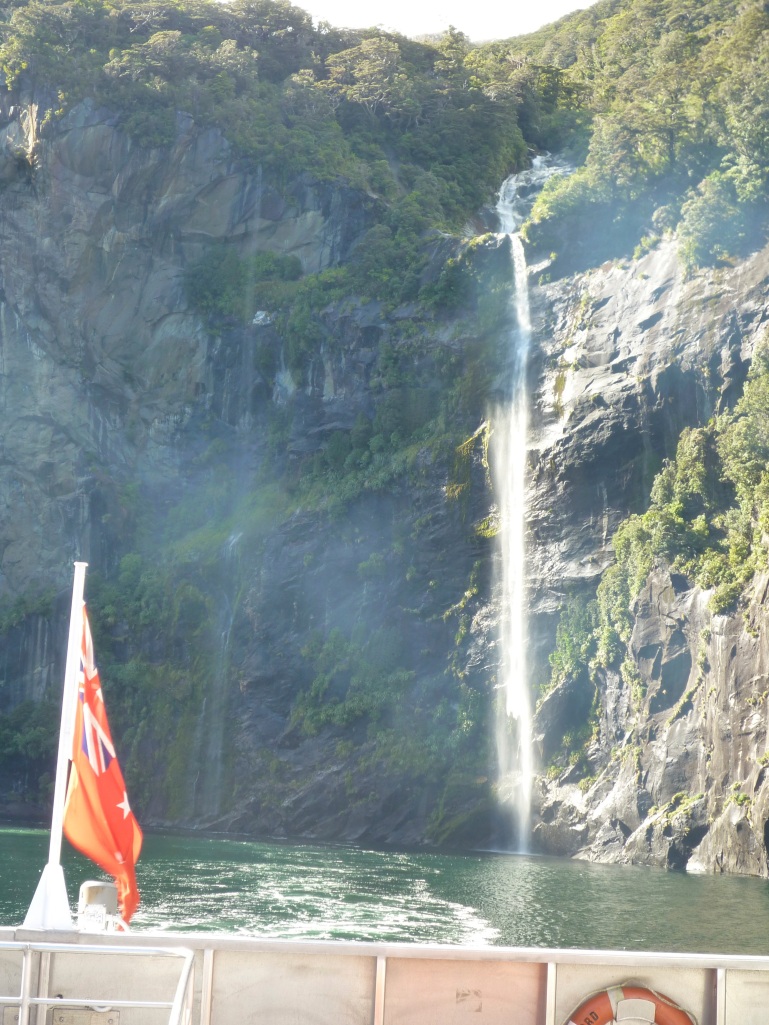 Leaving the waterfall we were just under

The point of this ‘stunt’ is to prove that the cliffs continue down below sea level just as steeply as they appear above it. Milford Sound, and I believe all the other ‘sounds’ in the region, is actually a fiord (thus why the region is called ‘Fiordland’), which means it was (Ages ago) a valley carved by a glacier, not a true sound which is a ‘drowned river valley’. Because the fiord is extremely deep, even very large cruise ships can approach the cliffs without fear of running aground.

Steep green thickly-forested mountain sides. One of the few stony beaches near the mouth of the fiord.

Another way to see the sights – if you have time!

Looking back down Milford Sound from the mouth 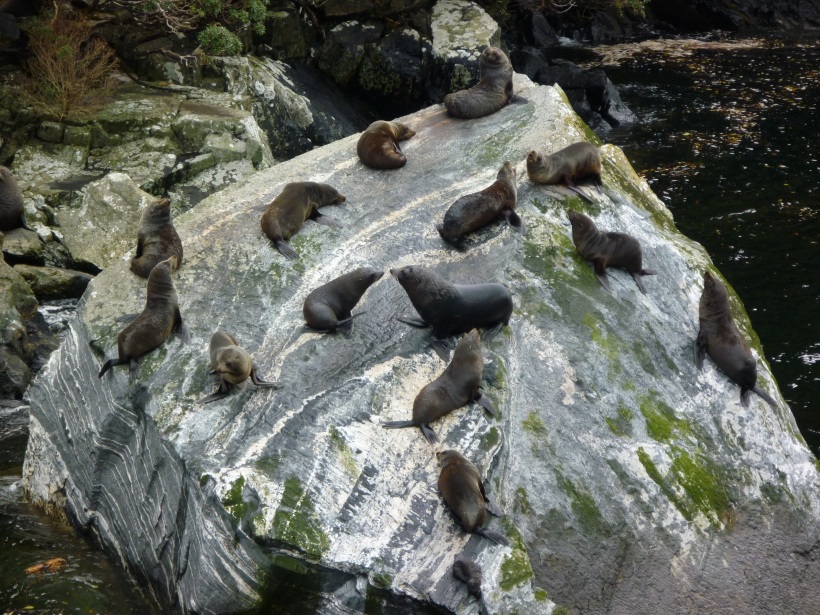 There used to be a sealing colony along the coast that was set up in the 1790’s. A sailor on good ole Capt’n Cook’s ship came back because he remembered there were so many seals here when they called by. It ran for 30 years until they ran out of seals to slaughter. So they turned it into a whaling station and repeated the story.

These guys just have to watch out for the occasional orca pod (aka killer whales)!

Not only did we see seals (that’s almost guaranteed), but we were lucky enough to see a small pod of bottlenose dolphins and two rare New Zealand Crested Penguins!

I was keeping my eyes peeled for whales – orca or otherwise – which are not common, but not unheard of visitors, but no luck this time.

The wind created by the falling water and the impact of the water itself create a  shattered glass effect on the fiord. 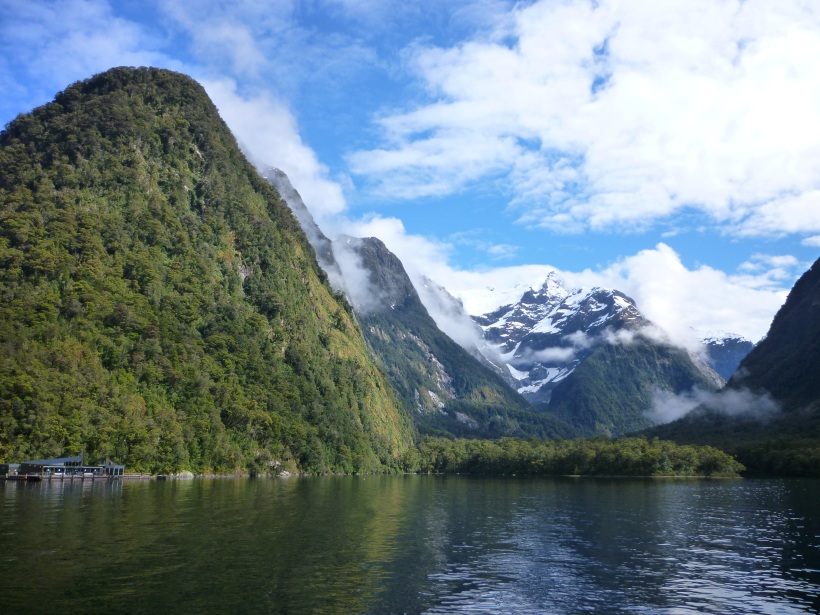 Underwater observatory (bottom left) in Harrison Cove, with a view behind of Pembroke Glacier

We didn’t have time to stop at the underwater observatory today, but I have been before and it’s definitely a worthwhile stop.

Although I enjoyed the cruise, one thing I noted was an absence of commentary from the captain/crew/someone about what we were seeing. A few years prior I had booked the cruise through Real Journeys (we were also on a Real Journeys boat on this trip), and the commentary along the way was very informative.

After the cruise we were back on the bus for the long ride back to Queenstown.

The road from Milford Sound up to the Homer Tunnel

I was pleased that Stephen would get to see the Homer Tunnel – I’d been mentioning it quite a lot in the lead up to the trip. It’s about 1km long, straight through a mountain – a great engineering feat in my opinion. Done mostly by hand and dynamite, it took a while to complete as work was interrupted by WWII. They dug it from both sides at the same time and met in the middle – and were out by less than a foot! Can you imagine trying to work that out? It’s a phenomenal achievement! 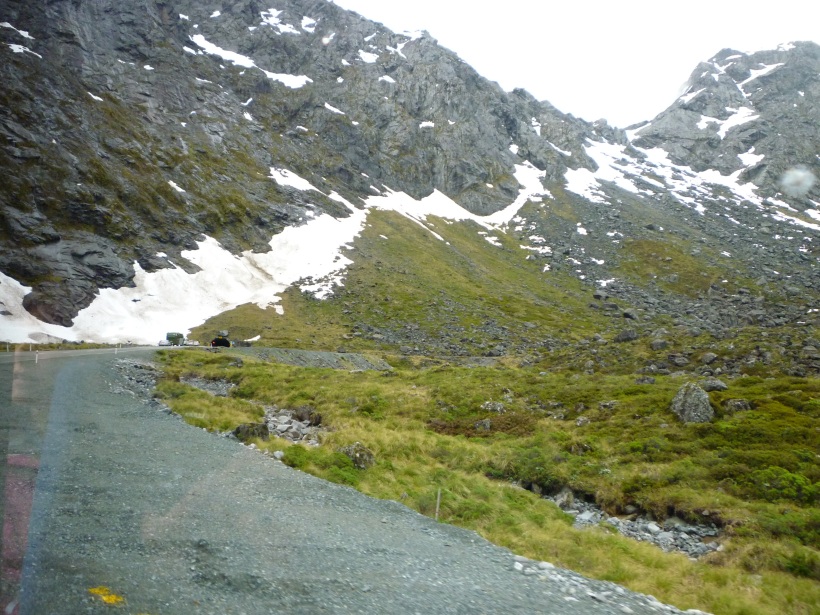 Looking back the Homer Tunnel exit, so small in the mountain side.

You can appreciate why avalanches and landslips close this road so often. The mountains here are just so steep and massive.

Driving down the valley; it looks harsher than the Clinton Valley.

A waterfall we passed right on the side of the road – you can pull over here if you’re in a car and heading towards Milford Sound.

I just can’t get over the water. It calls to me.

Despite the scenery, we were too tired to stay awake for the whole trip back. If you’re ever in the area and you have a chance to drive the road from Te Anau to Milford Sound – do it!! It’s a beautiful drive, and there are a few very worthwhile stops along the way that you just don’t get to do with a group. Definitely a case of enjoying the journey, not just the destination.

Oh, but remember – if you have to stop at the Homer Tunnel entrance, don’t leave your car unguarded to possible Kea attack!

We arrived back in Queenstown just before 4pm. We had a list of contacts (names & email addresses) for people in our group if we wanted to keep in touch… but we haven’t. Quite unlike our last infamous multi day hike, there wasn’t the same sense of group bonding on this trip. Not with the guides, not with the other guests. It’s hard when it’s a large group, when you’re not necessarily sharing a table with the same people each night, when you’re all wearing name tags and making more of an effort to find solitude and serenity on the walk than the opposite…

Don’t let me give you the impression that I have any regrets though! I don’t think we would do this as independent hikers, so Ultimate Hikes has allowed us – and so many others – to see a real jewel in New Zealand’s crown. I would recommend it to anyone who’s up for it!

We didn’t have a dinner reservation that night, but ended up at Wai on the waterfront. Top notch. 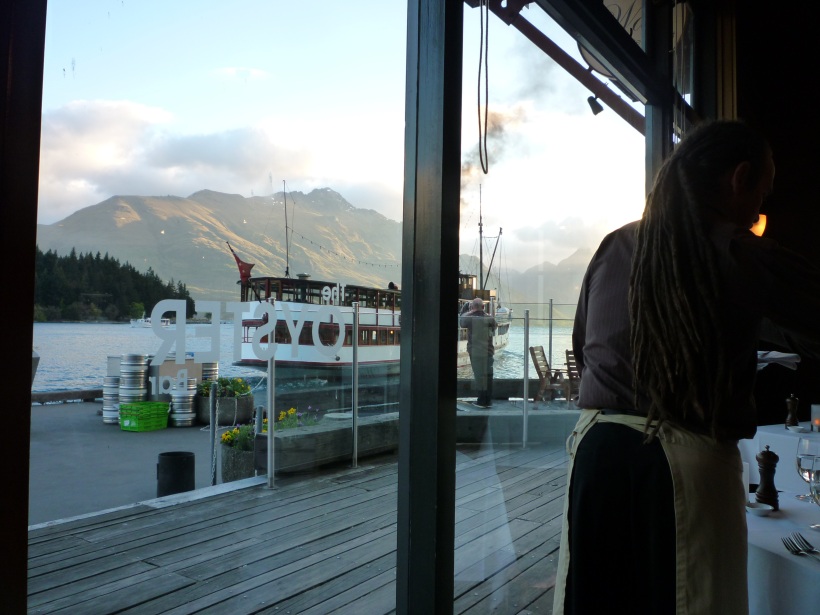 Dinner on the pier at Wai, Queenstown. The TS Ernslaw is setting off for it’s evening cruise.